One of the high points of my trip was an opportunity to trace part of the original alignment of US 71 in Louisiana. US 71 currently ends at US 190 near Krotz Springs, but it originally extended all the way to Baton Rouge. The original Mississippi River crossing between Port Allen and Baton Rouge no longer exists... the ferry was replaced in 1968 by the Interstate 10 bridge.

I picked up the trail again on US 190 near Livonia (I skipped the Livonia-Port Allen alignment since I had started late) and headed north and west on LA 77. A few miles past Fordouche, I turned west on LA 10... or what I *thought* was LA 10. There was a guide sign pointing to this non-descript dirt road that had no other signage on it, save for a stop sign for approaching traffic. My curiousity getting the better of me, I decided to follow it anyway. About 2 miles down the road, I came to a 3-way intersection, again unmarked. The segment to the west had a sign pointing the way to the Melville Ferry so I figured this was the way to go. Another couple miles, I came to LA 417. 417 went north on a paved road (though it dead-ends a few miles away) while a sign indicated 10 turned south (again becoming a dirt road). A mile down the road, I came to the Melville Ferry at the Atchafalaya River, but the ferry was closed. It only operates in the early morning and late afternoon.

It wasn't a total waste of time, though, as I found a long truss bridge over the river along the Missouri-Pacific Railroad. I turned around and returned to US 190 crossing the Atchafalaya River on it (and finding a pair of truss bridges as well). At Krotz Springs, I turned north on LA 105 towards Melville and eventually came to LA 10 (paved!). I headed east on 10 approximately a mile until I reached the other end of the ferry crossing... sure enough, the crew was still "out to lunch". Turning around, I headed west on LA 10 towards Lebeau where the road intersects the modern-day alignment of US 71 approximately 16 miles north of Krotz Springs.

Turning north on US 71, I pointed myself towards Alexandria. I missed a couple short possible old alignments that I didn't catch until it was too late. One was LA 1177 near Bunkie and another was LA 456 between Meeker and Lecompte. I had spent so much time researching the Lebeau-Baton Rouge alignment I missed a couple other relatively short sections, so I'll just have to go back again someday ;)

I saw no indications along either section of LA 10 or along LA 77 that either of these roads may have originally been part of US 71... all I have to go by is the old maps with which I spent hours painstakingly trying to locate the old highway. Still, it was an interesting drive, though not something I'd want to do everyday, but it was definitely worth checking out.
Posted by US 71 at 2:22 PM 1 comment: 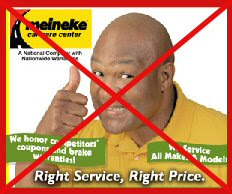 Yesterday, I took my van to Meineke Car Care in Fort Smith because of the ABS warning light was lit on my dashboard . I'm heading out of town in a few days so I decided it was best to get things looked at. I agreed to a $50 fee to hook up my van to a diagnotic machine, but the machine didn't work. One of the mechanics then accused me in front of another customer of rigging something in my van so their machine didn't work. So the mechanics had to manually locate the problem and identified it as bad brake cylinders on the rear wheels.

Well, $127 later the ABS light is still on and the brakes don't feel any better than they were before I brought it in. Did I really need new cylinders or was this just a convenient way to make a fast buck off me? At least they waived the $50 diagnostic fee since their machine didn't work.

Since then, my van has developed a new problem: it makes groaning noises everytime I make a sharp turn. I brought it back to the shop immediately, but was told it wasn't related to the brake work. I was told that maybe it was the power steering so they topped off the power steering fluid. But that didn't fix the problem.

So not only did Meineke not fix my original problem, but it looks like something else may have got messed up in the process.

I contacted their (so called) Customer Service Department and received the following response:

Thank you for contacting us with your concerns. At Meineke our goal is to provide all customers with quality parts and professional service at a reasonable cost. We are truly sorry to learn that our service did not meet your expectations.

As Meineke is a franchise system made up of individual business owners we will forward a copy of your correspondence to the owner of the shop involved for immediate attention.

We apologize for any problems you experienced with Meineke and hope this matter is resolved quickly.

Thank you again for writing,


Translation: It's not OUR problem. Talk to the local shop.

A large selection of my road photos dating as far back as 2004 are now posted on Mark Robert's Missouri Highway's site. Highlights include numerous button copy signs, an old yellow stop sign, and a lit-up Red Signal Ahead sign north of Springfield, MO. There are also some photos taken this last December along MO 249 near Joplin.

There is also a special page devoted to the Y Bridge at Galena, Missouri.

A complete listing of new photos can be found here. There are also contributor's lists showing who has donated photos to the site for the US Highway pages and Missouri Highway Pages. Oh, and that's no mistake... there is a David (or Dave) Backlin out there. He lives near Branson, MO. No relation, as far as I know ;)