Oklahoma is interesting. A lot of their smaller towns still have the old 4Way traffic signals... you know: the all in one signal that hangs in the middel of the intersection. There is one left in Hugo, and I have since found 3 in Poteau 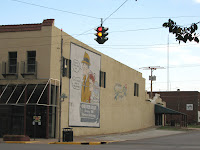 Plus another in Idabel Now, as you can tell from the photos, these signals do odd things like blank out or show two lights at once. Depending who you ask it's either an intentional design or a flaw resulting from worn out controllers. Or maybe it's a combination of both? All I really know is Oklahoma seems to have a higher percentage of old 4Ways than many other states do (I've seen zero in Kansas and only 1 or 2 in Missouri, but at least 4 in Mississippi). There's even a rare 4Way near  McAlester.

How the Mighty Have Fallen

I traveled to Wichita, KS for an SCA function this past weekend. What is normally a 6 hour drive took me close to 12 hours for all the "scenic detours" I made coming home.

One of my first orders of business was lunch since breakfast consisted of 2 sweet rolls and a couple mini doughnuts. I often find myself patronizing the local oriental buffet when I'm traveling, though with radically mixed results. I have found, however, that Jin Wei Restaurant in Oklahoma City is halfway decent. This trip, however, I opted for Godfather's Pizza.

Food is my weakness and pizza is my ultimate weakness. When I was in college, I worked for the local Godfather's Pizza as a delivery person and occasional cook. They quickly became one of my favorites with their pizza sauce (not too bland, not too spicy and you could see the spices) and their spicy Italian sausage.

Over the years, I had lost track of Godfather's. The restaurant I worked at is now a Gentlemen's Club and many of their other locations have simply disappeared. So I was pleasantly surprised to find one on the south end of Wichita (next to an oriental buffet, no less. Talk about a tough choice). I made it in time to enjoy their lunch buffet and prepared myself for a feast the likes of which I hadn't enjoyed for a long time. Yet, something was wrong: there were at least 10 pizzas on the buffet table, but only about 4 varieties. There was pepperoni, of course, as well a combo, and something resembling sausage & black olives. The last appeared to be Italian sausage, so I helped myself to three slices right away.

Well, it was sausage with ham bits and onion, which I discovered once I sat down to eat. Onions on pizza don't agree with me so I quickly removed them as well as most the ham bits. Something I noticed right away was the sauce was bland. That could be any number of things: (1) a new recipe, (2)thinning by the restaurant to stretch their food costs or (3) skimping on the amount of sauce put on the pizza. My guess is #3, possibly #1, but I have no way of actually knowing.  The Italian sausage, however, was almost as good as I remember it (heck, it's been over 20 years). The pizza crust was a bit dry & chewy, but may have been a victim of sitting too long on the buffet table.

I couldn't help but feeling that Godfather's has slipped a bit since I worked for them. The counter staff seemed more interested in having "social hour" with their co-workers than taking care of customers (then acting like it was big chore to do so) as did the person who was supposed to be bussing tables. But beyond that (which I see almost everywhere now days), the food quality just didn't seem the same. Maybe it was because everything had been sitting on the buffet table for a while. Like I said: the Italian sausage was good, but the sauce, the cheese and even the pepperoni didn't seem to measure up to the high standards I remember them having. So while my lunch was good, it was not spectacular.

I can't help but wonder what happened to the Godfather's Pizza of my college days: am I seeing those days through rose-colored glasses and remembering things better than they were or has Godfather's succomed to the corporate philosophy that if you cut a few corners, you can fatten your bottom line?

One thing I did this Summer was expand my meager sign collection.  I love old signs, but haven't the money nor space for them. I had been talking with "Agent Steel" over on AA Roads Forum about possibly procuring an old sign or two (or more accurately: a reproduction of an old sign).  I already have a US 71 sign and a US 66 sign so I opted for a state shield, but what number? I used to live on 45, but 68 was replaced by US 412.  Finally, I had my inspiration: AR 471. 471 only existed for 2 or 3 years in the 1980's (replacing old US 71 in NW Arkansas, then becoming US 71B). How better to remember AR 471 than with a 1930's cut-out shield:

I'll post a photo of the actual shield later. I'm still looking for the "perfect" spot to hang it.

It's been a busy Summer and things don't look to slow down for at least another month. I have lots of news, lots of updates, including repairs to US 71 near Mountainburg, the nation's first Diverging Diamond Interchange, commentary about the ARRA (American Recovery and Reinvestment Act) and more. Also a few photos from the Oklahoma Road Meet back in June (including the Ronald McDonald Memorial Toll Booth ;) ).

It's going to take me a day or so to find all my notes & photos, then at least a couple weeks to work through the backlog (while hopefully) posting new items. In the meantime, here's a sneak peek from Oklahoma City featuring some button copy highway shields along I-235. 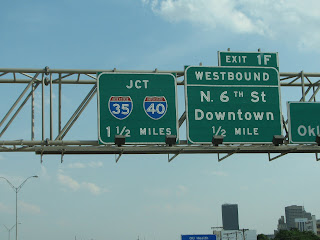