Is There No End?

After all these years, I'm thinning out my map collection. OK, I wrote that a week or two ago. BUT, the sorting continues. I thought I had it all wrapped up, then this morning I found yet another box of maps, so now I'm trying to get them priced and sorted. Oldest map so far: 1929 Illinois map by Highway Map Company

Eventually, I will probably put many of these on e-bay, but I'll first offer them to fellow RMCA members. THEN I'll think about e-bay. I'd rather price them low and move them out than put them on e-bay and wait.

Anyway, back to work.

I'm getting a head start on Spring cleaning by thinning out my map collection. I've been collecting for who knows how long and have an assortment from almost everywhere in the U.S. I never intended to start that way... it sort of happened. I bought out one flea market that has a bunch of old Phillips 66 maps from the early 60's (I fell for the line that it was cheaper to buy them all rather than the 3 or 4 I wanted), and have generally collected maps wherever I go. I'm not even sure how I got some of these (1977 Alabama? I was there once in 2004, though I'd like to go back). Maybe I bought out another collector? Sometimes, I will bid on e-bay for a group of maps just to have the one or two I really want.

But everything else has to go! I no longer have the space for them and I rarely look at them, though the 1948 Kansas map is interesting. So, out they go. I'm listing everything I have by date, location, publisher and condition. One problem though: I have over 400 maps to sort. About 1/4th of them, I'll probably keep, but I have waaaay too many maps. So it looks like I'm going to be a while.

Now the most interesting so far is a Standard Oil Travel Packet. Actually, there's two of them. One is from Clarance, MO (west of Hannibal) to New York for the World's Fair in 1962. The maps are in very good condition overall and includes a lot of gas station receipts. The second packet is a trip from Missouri to Florida in late 1965. No receipts this time, but there is a list of apartments plus the card from a real estate agent in Florida. Maybe these were "snowbirds" fleeing to Florida for the Winter?

Anyway, I've got to back to sorting & pricing. Plus I have to renew my Driver's License at the DMV today.

Well, as I'm sure everyone has noticed, gas prices are on the rise again. The lowest point around here was about $2.289 for Regular Unleaded. Now, the average price is around $2.499, which makes shopping for the best price that much more important.

I was in Fayetteville last week running some errands and decided I needed to get gas before heading home (when on the road, I don't like going below 1/4 tank). I saw one station charging $2.499, but thought I could do better.  A couple miles down the road I saw EZ Mart advertising $2.439 for Regular Unleaded, so I stopped. Imagine my surprise when I pulled up to the pump to find the price was $2.489 (!). 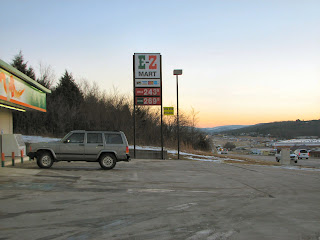 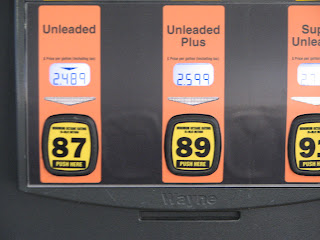 Well, obviously, I decided not to get gas. Fortunately, I found a Shamrock station another 2 miles down the road advertising $2.439 and the pump matched the sign.

Times like this, I'm glad I keep my camera handy ;) 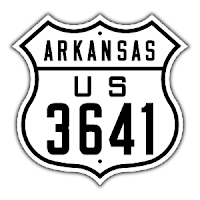 Well, it's happened again: yet another Arkansas roadway has done the "slip n slide". This time, it's AR 23 north of Ozark.

Dubbed the "Pig Trail" for it's twisty, narrow curves and steep grades, 23 winds through the Ozark National Forest and has long served as a shortcut to Fayetteville (and the University of Arkansas) for college students driving in from Little Rock and other ares of the state. In recent years, AR 23 has seen less traffic with the opening of I-540 some 20 miles west. Still, it's a popular scenic drive in the Spring, Summer and Fall. In the Winter, no so much... especially when the snow and the ice come rolling through.

Due to an overabundance of rain the past two Springs, parts of the roadway had started to erode and slide down the hillside. While the contractor was scheduled to simply repair the washed out area leaving one lane open to traffic, further damage has been found requiring the whole roadway be closed while the contractor repairs that damage as well (for an additional cost, as well)

Now, I can't help but wonder why AHTD didn't forsee this. They did the same thing on US 71 a few months ago: fix the worst of it, ignore the rest, then find out the whole area is bad. I can't help but wonder if AHTD is trying to do thing "on the cheap" rather than fix things right.  It would seem to be a no-brainer that if half the roadway has washed out, the remaining section might do the same thing, no? Why not a little ARRA money to fix this right rather than spending it in roads that don't need attention? *sigh*

Still, the contractor is working 7 days a week right now to get the roadway at least partially opened to traffic while they continue to repair the original damage. 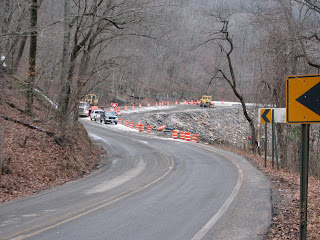 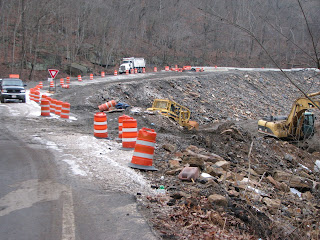 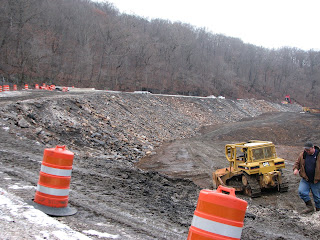 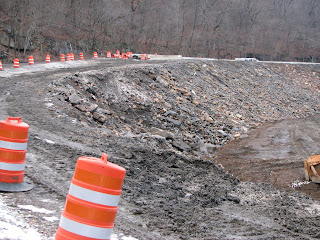 As you can see, I was able to drive up and take a look yesterday. The rock embankment is being hauled in from a site about a mile south. Part of a hillside is being dug out and the rock used to shore up the damaged roadway here. I was passed by 3 dump trucks while I was taking these photos. The gentleman operating the dozer told me the muddy ground was making this a really tough job.

No photos, unfortunately, but coming home via AR 103 towards Clarksville, I saw several spots that could be prime candidates for the next washout. I guess we'll find out in the Spring.