It's not just old bridges which are going away, it's ferries.

The Louisiana Department of Transportation and Development has announced the Melville Ferry will cease operations in October due to economic circumstances. According to various news stories, it costs LADOTD $100 to $150 per vehicle to operate the ferry, while it charges $1 to use the ferry.

I visited Melville 2 years ago, but was unable to use the ferry since it was a Sunday (it only operates Monday through Friday). I had hoped to go back next Spring and visit it again, perhaps having the opportunity to actually ride on it. If I want to do that, I'll have to drive down there sometime in the next two months, which doesn't appear likely.

Information regarding the history of the ferry is sparse to non-existant. I can tell you it crosses the Atchafalaya River along an old alignment of US 71 (now LA 10) and that the highway is unpaved east of the river. I've contacted LADOTD who said LA 10 would remain in service, as is, for now with signs being posted to redirect traffic around the closed ferry.

As if I didn't have enough stuff to waste my time, there's a new website call Landmark Hunters It starts with your basic National Register of Historic Places entries and expands to cover other points of interest as well, such as old traffic signals, bridges (of course), service stations,  even old roadways and barns.

There's just not enough time in the day for me to post there and do everything else I need to do. I need twice as many hours in the day and less to do.

I was in Beebe, Arkansas recently and continued some research into old alignments of US 67. Being a major North-South highway between Little Rock and Missouri, it has been upgraded and improved numerous times. Based upon some old maps and personal research, I have found 3 separate alignments.

(1) 1926 Original alignment: north from Ward to US 64 approx a mile west of Beebe. East to Beebe then northwest along East Center St (now US 67B)

This map puts all 3 alignments in perspective:

Why? Because it's there. Because I have a fascination with old roads.

I'm also working on US 71, but that's best left for another day.

One of my photos appears today in the Fort Scott Tribune.

I Write Like by Mémoires, Mac journal software. Analyze your writing!

An Accident Waiting to Happen

I stayed in a couple hotels on my trip including the Travelodge in Ottawa, KS. The place is obviously an older hotel that has seen better days.The room was small, the shower was dirty and the a/c control panel was so worn you could barely see the settings.

My biggest concern, however, was the ice machine: 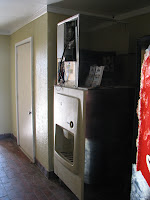 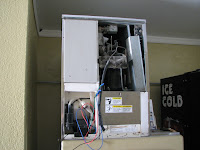 A missing panel, exposed wiring...this is an accident waiting to happen! I wasn't sure about staying here again due to the run down conditions and the poor quality service, but this makes me want to run away very quickly. I think it's only a matter of time before someone is hurt or there is an electrical fire.

Got back last evening from a 5 day trip to Ottawa, Kansas. I came home with over 1200 photos (though I only wind up using about 1 in 5) of signs, bridges and other items of interest, including this bridge over the BNSF Railroad northwest of Ottawa 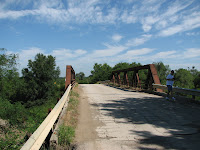 (get out of the way, Richie)

I love traveling, seeing the countryside and taking photos, but it's exhausting! It always takes me a few days to recover. I'd love to be able to sleep all day, but there is too much to do around the house (so what am I doing here? I've got laundry to do.) 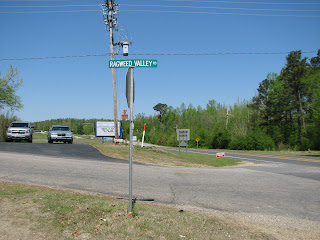 Last Summer, US 71 north of Mountaiburg was closed for several months following a washout. What started out as a relatively simple project turned into something more. Instead of fixing one lane, the whole roadway had to be rebuilt.  Eventually, the roadway was repaired and everything returned to normal.

Back in April, I spied another potential washout, again on US 71. This one was approximately 2 miles north of the previous washout, about 2 miles south of Artist's Point.

You can see here the cracks developing as well as some previous attempts to patch the damage. 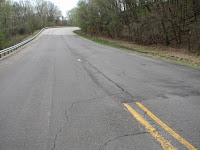 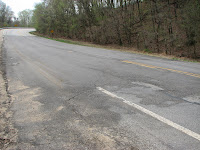 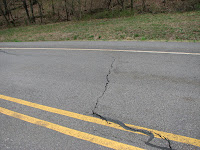 I've been by a couple times since and it appears AHTD has applied some crack sealer to some of the damage... but will that suffice? They did the same thing to the other washout last year until it became apparent it wasn't working.

Yes, washouts do happen, especially in mountainous areas. AR 7, AR 23, AR 16, US 71... all have suffered washouts. But two in two years along 71? I thought AHTD was still going to care for roadway after I-540 opened... at least, that's what they promised to do. But then, US 71 is over 80 years old. It hasn't had any major work done for over 20 years, and most of that was just widening some of the narrow curves.

Well, OK, AHTD is replacing some bridges between West Fork and Winslow. Now, most of those bridges dated back to the 1960's and were starting to show their age, but I doubt any of them were in danger of collapsing. Why couldn't the money have been used to ensure the roadwasy itself wasn't washing away?

Oh wait! This is Arkansas. We use economic recovery money to repave perfectly good roads and ignore roads and bridges that really need work.

One of the things I enjoy when photographing bridges is finding one that's been long since forgotten and abandoned. I've lost count of the number of bridges I have found that everyone else has forgotten about.

One such bridge was the Duck River Bridge at Centerville, TN. A two-span through truss bridge, it was built in 1913 and bypassed by a new bridge in 1970. I found this bridge in July 2006 on a trip to Columbia, TN. I took some photos and promised I'd be back another day. Somehow, I've just never made it back to that area. There was a time when I'd travel to Tennessee every Summer, but the last few years I haven't.

I received word a few weeks ago that the old bridge is no more: a casualty of the May flooding in parts of Tennessee. The whole bridge was washed away save for a couple piers 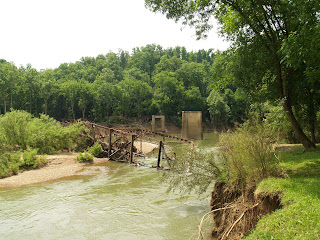 It's not the first bridge I've visited that is no longer there and it won't be the last. Still, it's a shame to see the old bridges go, either by acts of nature (flood, tornadoes) or acts of man (torn down to make way for a new bridge). 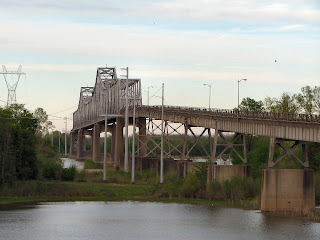 Having driven across the bridge a number of times, I can tell you it's a little nerve wracking. Its total deck width is only 24 feet, meaning it has but 2 narrow travel lanes and no shoulder. That isn't too bad unless there's an on-coming semi-trailer truck or a speed demon on your tail. Still, I hate to see it go... most modern bridges have no personality.

The new bridge, a cable stayed bridge, is being built just to the south of the current bridge. It will have 4 12-foot travel lanes, plus shoulders. Kind of fancy looking, if you ask me: 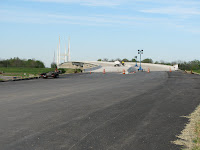 So, perhaps the old bridge's time has come, but it doesn't make me any happier: I hate to see the old bridges go. There seem to be so few left and growing fewer every year. Too bad no one ever thinks of making one of these a pedestrian bridge like the old Chain of Rocks bridge.

A couple months ago, I noticed one of my photos had shown up on Cafe Press: I took this photo in 2007 near Flippin, Arkansas.  AHTD had just opened a bypass and some of the signage had not been completed. The 178 shield was a bit odd (construction signage often is) so I snapped a photo.

Imagine my surprise when I found my photo on Cafe Press and someone selling shirts with the Flippin Business sign. If you look at my Flickr page, my photos say "All rights reserved". I've shared a few with a couple museums, but I have always requested my name be attached (as in "photo by..."). Well this guy didn't even bother. He simply lifted my photo and hoped I'd never notice.

So I contacted Flickr about this, only to be told in effect "This photo is on an external site so it's not our problem". Not your problem? This is MY photo stolen from YOUR site and it's not your problem?

I then contacted Cafe Press explaining my problem. Although reluctant at first, they eventually contacted the shop owner (who lives in Spain). A week later, I received notice that the photo had been removed and the shop owner was requesting permission to continue selling the goods produced with my pilfered photo.  I agreed, but only if the shop owner agreed to pay me a commission on all items he sold with my image. I never heard back. The photo is gone, but he is continuing to sell items produced from the photo.

So, let that be a lesson to everyone: anything you post on Flickr is subject to theft by a 3rd Party and neither they nor Cafe Press have any respect for intellectual property rights.

Anyone who has been to Kansas City in the last year the US 71/MO 150 Interchange is being rebuilt. Traffic is a big mess trying to negotiate all the lane switches & detours. One of the Detour MO 150 signs caught my attention when I was up there a couple weeks ago: 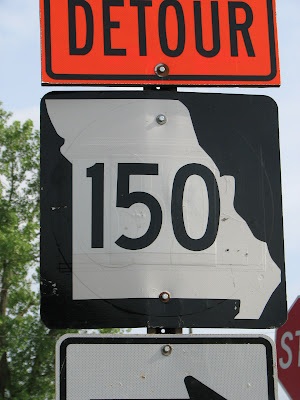 I'm super sizing this photo you can get a good look at it. You can see the Missouri route shield and the route number (150), but something else is there: there appears to be another route number underneath. It looks as if it may be 350. But beyond that, there appears to be the outline of another route shield... something round. But Missouri doesn't have round route shields. So what can it be? Is it a rescued pre-meat cleaver Oklahoma shield? Is it a contractor error using a circle for a Missouri State Route instead of the silhouette? Looking again, I think I see 32 on one of the layers.

Only other thing I can figure out is maybe it's a reused detour sign from Iowa.

I'll probably never know for sure.