I'm sure almost all of you have seen them and many of you have used them: on-line maps. There are several different maps sites out there including MSN/Mapblast, Yahoo, Bing and a few more.

I recently took a trip to Memphis and looked up my route using Google maps (I was going to a campsite I'd never been to before). It told me it was 320 miles and would take 4.7 hours. Doing a little math, I came up with just over 68 mph.  At 65 mph as I usually drive (better gas mileage) it would take 4.9 hours.  Mind you, that is non-stop (no gas stops, no bathroom breaks, no stopping at the golden arches).  So I planned on 5 1/2 hours. It took me about 10 minutes over that due to traffic and lower speed limits on some of the roads.

So if you use on-line maps, always allow extra time beyond what the information tells you. My general rule is to allow at least 30 minutes more for every 6 hours. That allows for slow traffic, gas stops, etc.

ALSO: before you go, verify the given directions with a map or atlas. Most on-line maps use primary roads for their routing and you can occasionally save time by selecting a secondary route. When I travel to Hattiesburg, Mississippi, I'm often routed along I-40 to Memphis, then down I-55 to Jackson, the along US 49. But if I go down I-530/US 65 from Pine Bluff, I save around 80 miles and almost an hour driving time. It's also much more scenic ;)

Bottom line: if you use on-line maps, always allow more driving time than the site gives you and don't be afraid to check for alternate routings. Most importantly , however, is keep a map or an atlas with you on your trip. Google won't tell you if a bridge if closed for repairs or if the road washed out.  And occasionally, they get the route numbers wrong.

For those who haven't guessed, I love signs. I've never figured out why, but I do.

Doing some research into highways and signage, I have found that some states used to have colored signs... ie: not simply black & white. Mississippi, for example, once used blue, red and green (a different color for each direction) 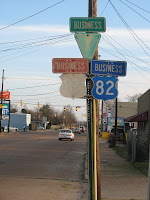 Well, through the "miracle" of e-bay where I "window shop" for lots of signs, I've discovered another style: partially colored US 16 in South Dakota: 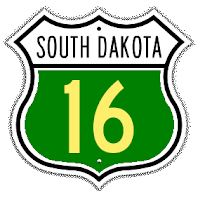 (No, that's not the actual photo... it's a photoshop rendition)

Of course, most of these signs disappeared by the late 1950's/early 1960's... part of AASHTO & USDOT's plan to homogenize highway signage.

As near as I can tell, Arkansas and Missouri had no technicolor signage. Texas didn't either, though they had their own variant of the US cut-out shield: 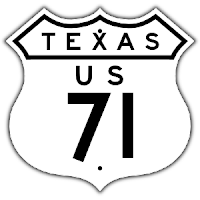 I would love to have seen a colored Arkansas sign, but alas, they never existed. Guess I'll have to make my own someday.

Yes, I have a lot of catching up to do. Between being on the road almost every weekend and my computer crashing, I have lots of news to catch up on.

4 new interchanges have opened on US 71 north of Carthage, MO

Arkansas has taken a few small steps towards building I-49 between Bentonville & the Missouri State Line. For now, it appears it will be built as a "Super 2" (2 lanes, controlled access) over a period of about 10 years, to be upgraded to 4 Lanes as money becomes available.

For sign fanatics: I-540 in NW Arkansas is receiving new exit signage, with street names instead of city designations. First ones appeared last month at Exit 62  for US 62/AR 180 Martin Luther King Jr Blvd (formerly Farmington/University of Arkansas exit).

I'll have more information on these tidbits in a couple days. In the meantime, I have lots of Missouri and Arkansas photos to upload on Flickr. Several bridges (including a stone culvert on old US 50 at Union, MO) and a random assortment of road signs (including a couple AR 87 signs spotted in Missouri).

Guess I better get busy!