Well, I missed my goal of 6000 photos on Flickr. My final tally will be in the 4500 range. It was a lofty goal, but I thought I could do it. Unfortunately, the slow economy prevented me from taking as many long trips, so I had fewer opportunities for bridge photos and odd sign photos.

I did get do drive through New Orleans back in March and found lots of photo ops. I wish I'd had more time to explore the area than I did, but I can always go back another day.

I also found some old bridges between Ottawa & Emporia, KS, thanks in part to Richie "Route 56" Kennedy. I've also seen several on Bridgehunter that I really want to go find. I don't know if I'll make it anytime soon, but I can always hope.

So it was a good year for photos, but not a spectacular year... but I can always vow to do better next year.

I think for 2011, I'll set a goal of 8500 photos on Flickr. There are several older bridges along old US 63 near Jonesboro I want to go find, plus a WPA bridge near Gilbert that appears to be well preserved. I wish I had the time and money to simply take a week and do all these in one trip.

Part of being a Road Scholar (or Roadgeek if you prefer) is a 6th sense about roads. I can often sense when something is different or not quite right.

This happened to me recently along US 71/I-540 between the Missouri State Line and Fort Smith. I wasn't sure what it was, at first, but something didn't feel right. Then one day, I did a mileage check: as I drove it, it was 97 miles from the Missouri State Line along US 71 to the Oklahoma State Line near Fort Smith along I-540 (technically, it's US 271 at the State Line, but it's a continuation of 540). This was as I drove it, following US 71's current alignment along I-540 and I-40. No big deal, right?

Now, it gets interesting: as 71 is signed, it is 100 miles from Missouri to Oklahoma. I base this off the mileposts and exit numbers along 71 and 540. The last posted exit is Exit 98 for AR 340 at Bella Vista. From there, it is two more miles to the Missouri State Line. So that means the exit number is wrong if you base it on how I drive it. The next numbered exit going south is Exit 93 for US 71B at Bentonville. It's also incorrect. My calculations show it is 7 miles from 71B to the Missouri State Line, so this should be exit 90, not 93.

Based on what I have found, the error occurs somewhere between US 62 (Exit 86) and 71B (Exit 93). I've not figured out at exactly what point the error occurs, but may be a matter of multiple round-off errors (rounding mileage up to the next Milepost). Either way, it probably doesn't make much difference and I'm probably the only person who has noticed this.

Someday, maybe I'll ask AHTD about it... but not today.

Normally, I don't delve much into politics, but I felt the need to rant a little.

As many of you are aware, the US is in the middle of a Recession... or ARE we?

For the average individual (including myself) this has been a rough year. Yet, there are some who don't feel it and aren't affected: big business.

It's interesting to note that while a lot of folks are just getting by, major corporations seem to have money to burn.

For example: how many major hotel chains have introduced new or remodeled logos this past year (I can name at least 3)? How many small chains have bought up by their larger rivals? For major corporations, there is no Recession: they still have plenty of money.

Yet, many small businesses are hurting: how many individual hotels have changed brands in the past year? I've seen Holiday Inns become Ramada, Super 8's become Americas Best Value. I've seen name brand hotels suddenly change to "no name" (or generic names like "Budget Inn" or "Economy Inn"). Why? Because franchise fees are lower, commissions are lower and maintenance standards are lower. So to save a few dollars, hotel owners are opting for cheaper franchises to conserve their money.

I'm using hotels as an example, but they are by no means the only industry.

Now then, we have a brand new Congress coming to Washington, DC in January. Who do they want to give tax breaks to? The corporations! The same people who seem to have plenty of money already.

Going Round in Circles

An article in the Arkansas Times reports a new Roundabout (or Traffic Circle as some call it) has opened in North Little Rock at the intersection of Pike Ave., Riverfront Drive and Broadway (AR 365 at AR 100). No sooner did officials cut the ribbon when a driver went the wrong way through the Roundabout. Kind of makes me wonder how they would have reacted to a Diverging Diamond?

As many of you know, my fascination with highways includes signs. I have about half a dozen old signs in my possession, plus a couple modern remakes of old signs.

I read recently that AHTD (Arkansas Highway and Transportation Dept) was planning to replace the exit signs along I-540 between Fayetteville and Bentonville. The new signs will be metropolitan-style exit signs: instead of a destination, the street name will be used. US 412, for example, will change from Springdale/Tontitown/Siloam Springs to Sunset Ave.

The changeover is occurring slowly with the first signs to change being for US 62/AR 180 which went from the Farmington/University of Arkansas Exit to Martin Luther King Jr Blvd.

Next was AR 112 which went from a no-name exit to Garland Ave.

What happened after that, requires some explanation 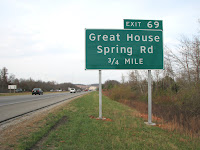 This is for the former Johnson exit, now Great House Spring Rd 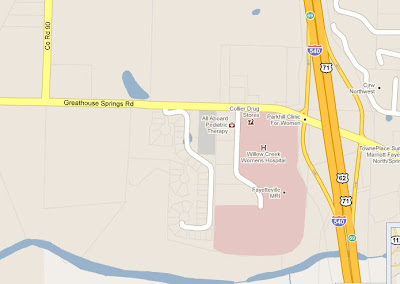 So what happened? Probably a contractor error... someone not paying attention when the signs were made.

As, for what happens next, who knows? So far, I think I'm the only one who has caught this error. I've contacted AHTD to see if they know about this, so I guess we'll see what happens ;)

UPDATE: I received the following message from AHTD this morning:

We made the mistake of making the signs with the same wording the City of Johnson has on their street name signs. Afterwards, we found out their signs were wrong. We are in the process of correcting the signs to read "Greathouse Springs Rd".

OK. now I need to investigate that.

My bad... I've been distracted as of late. Long story short, I was in Booneville, AR one weekend, Colmesneil, TX the next and Springfield, MO the weekend after that. I've got lots of photos, though... mostly from Texas and Louisiana (yes, I've been in Louisiana, too).

I've got lots of stuff to blog about IF I can find the time/clear my head enough. I have some updates on I-49 construction in Louisiana, a little bit of Arkansas I-49 news, and a plethora of other random bits including a pseudo-political commentary.

I guess I just need to sit down and make some time every day to post.