Every year, I explore a different area. This year was Excelsior Springs and Liberty. Leaving the lake, I drove east on MO 92 to Excelsior Springs then through town on old US 69, eventually winding up in Liberty.

I noticed in Liberty that part of MO 33 had been decommissioned. I guess the town didn't like the large trucks rumbling down the road (I saw several NO TRUCKS signs).

When I got to old 33 and Main St (aka Route H), I saw the strangest thing: a three lens traffic signal with NO Yellow signal: it appeared to be Red with two Green Arrows. 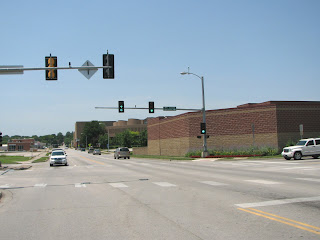 So I had to stop and take a couple photos just so I could post it on my Flickr page, but while I was doing that, the signal changed to Yellow (!) 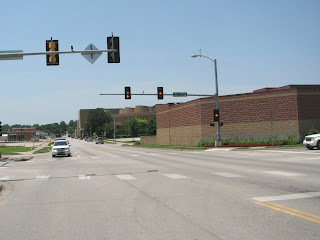 My initial reaction was WTF? The it dawned on me: dual LED's in the lenses. That seemed strange to me. Maybe it was cheaper than a 4 Lens set-up with Red, Yellow and 2 Green Arrows? 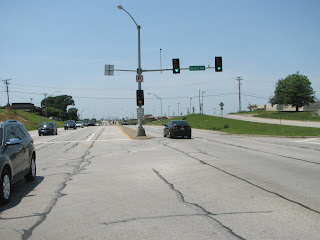 I have yet to spot this anywhere else besides Liberty, so maybe this is just a local phenomenon.

Today, the local Shell stations all went back up from $3.219 to $3.329 for Regular Unleaded. Did I predict this or what? To be honest, I didn't expect it to happen so soon, but it did.

I'm surprised Shell went back up so quickly, but the price increase itself is no real surprise. Of course, that has nothing to do with their $5 Billion in profits in the first 3 months of 2011, does it?

If you've been following the news, you've probably heard that gas prices have fallen quite a bit in the last week or so. President Obama let out some of the national oil reserves in an attempt to bring prices down. But I'm not here to discuss the should he/shouldn't he. This is about gas prices themselves.

The local Wal-Mart/Murphy USA near my apartment has come down to $3.219 for Regular Unleaded, after having been sitting at $3.329 for several days. It didn't happen ovenight, though: the independent station across the street (Joey's) went down first, then Murphy followed by going one cent lower that the competition. Then Joey's went down 2 cents, then Murphy went down 2 cents. So we had a little gas war going for a couple days. However the local Shell stations are sitting at $3.329. No one can tell me why except that's the price they were told to charge. So is Murphy cutting their throat at $3.21 or is Shell gouging their customers at $3.32? For the sake of comparison, Mr Jiff is $3.199 Cash Only.


In Ohio, gas has been as low as $3.299 this week, but is on its way up to around $3.459. Reason? According to Gas Buddy, there has been a refinery shutdown... just as prices were coming down. Coincidence? Maybe, but I doubt it. Chicago has the same problem: every time gas prices start to decline, there's a problem at one of the refineries and prices spike back up. Meanwhile, the oil companies are reporting record profits (again).

Prices may be low now, but I predict they won't last long. There will be a refinery shutdown or a pipeline break or OPEC will suddenly cut production... or some other excuse. The oil companies own us. No matter what happens, we're owned by the oil companies. No matter how low prices may go, they will always find a way to screw the public to fatten their bottom line.
Posted by US 71 at 11:38 AM No comments: Links to this post

Nobody's perfect. Same goes for pizza. There is no such thing as the "perfect pizza", or I've yet to find it. Everyone is different and everyone has good days and bad days.
I've tried lots of pizza (probably too many). I've tried chains and independents. Both have been good, both have been bad.


I regularly patronize the local Lunch Buffet at Pizza Parlor and it's OK... not great, not bad, but OK. It's thin crust, but it's a limp crust. The toppings are of decent quality, but not "knock your socks off" great. But it's OK when I have a craving for pizza (which is way to often, I fear).
Last year I tried 417 Pizza in Springfield, MO as well as Bud and Walt's Pizza in Nixa. Both were a thin & crispy crust and both were very good. 417 Pizza was subtly better, in my opinion: the sauce had a little more flavor to it.


A couple weeks ago, I tried Pizza Shoppe in Kansas City. Another thin crust offering, also very good. I liked them just a little better than 417 or Bud & Walt's, but it was close: I liked the sauce a little better and the toppings were a little more flavorful. Hard for me to say, though: I probably would need to sit down with all 3 at once to figure out which I really liked the best.
Once upon a time, I thought no one could be lower than the local Buy 1 Get 2 pizza place (you know: Buy 1 at three times the price, get 2 free), but I found someone: Casey's General Store. The pizza had no flavor. The sauce was bland like cheap tomato sauce and the toppings were cheap tasting and greasy (OK, all pizza is greasy to some degree, but this was just bad, IMO).
Everyone has their own opinions on the chains, but I prefer Papa John's or Pizza Hut. Papa John's has good toppings and good cheese. Pizza Hut used to be good, but their quality has been wavering as of late. One store is good, the next is crummy. I used to like Godfather's as well, but they have slipped over the years. If they could get their act together, they'd be better than Papa John's.


My all time favorite: it's a toss up between King Pizza in Fayetteville, AR and Pizza by Stout in Joplin, MO. King Pizza started in the mid-late 70's, but disappeared for a while to be replaced by the Buy 1 Get 2 Free pizza place... long story. In brief: the old owner sold out (don't remember why) and the new owner ran the company into the ground. Pizza by Stout, as has been relayed to me, was a KP franchise that went independent when the company was sold. However, King Pizza came back a couple years ago as Ye Olde King Pizza and is now owned by the original owner's son.


The differences are subtle between King Pizza and Pizza by Stout. It's really hard for me to describe. Pizza by Stout has a slightly spicier sauce, I think. Again, I'd have to sit them side by side to truly judge which I like better. Sadly, that likely won't happen anytime soon as Pizza by Stout's building was destroyed in the tornado of May 22nd. Everyone is hoping they'll rebuild, but they still haven't decided.


Either way, I'll keep eating pizza and looking for that elusive "perfect pizza".

I got pulled over for speeding a few months ago (New Year's Eve...actually about 1am New Years Day to be exact). I was pulled over in Central City, AR for doing 63 in a 50 mph zone.

Central City is, almost literally, a wide spot in the road along AR 22 east of Barling, though part of it spills onto AR 255 near Lavaca. It has one gas station (out of business) and one restaurant (also out of business). The town is otherwise unremarkable, though 22 is in the process of being widened to 4-Lanes in the area.

I was headed home from a party and encountered a police car sitting at the west end of the Vache Grasse Creek bridge. No sooner did I cross the bridge when the car started following me. It took a while before they lit up and forced me to stop. But here is where it gets a little odd.

I had 3 (count 'em THREE) officers come up to me and ask if I had been drinking. I had been to a party at a friend's house near Paris, but I stuck to soft drinks (I DON'T drink and drive: I've seen too many friends and friends of friends hurt or killed by drunk drivers). Then they made me get out of the van and do the "walk the straight line" sobriety test and the "balance on one leg" test (I walk with a cane part-time: it's near impossible for me to balance on one leg). Then they gave me the breathalyzer test, which came up zero. Were they that dead set on trying to nail me for DWI?

Eventually, they let me go though I got a speeding ticket for the afore mentioned 63 mph in a 50 zone. Then they took off in pursuit of the next vehicle coming down the highway. I was a bit rattled from my experience so I didn't notice until I got home they kept my proof of insurance. Why? They couldn't arrest me for DWI so they kept my proof of insurance. WTF? It's also interesting to note that the location where I was supposedly caught speeding was west of where I was pulled over (and I was heading west). So was the ticket filled out ahead of time?

A couple days later, I retraced my route (making doubly sure to stay below the speed limit). The normal speed limit is 55 mph in that area, but due to the roadway being widened, it's a 50 mph zone, but it's poorly posted. I saw no Speed Limit 50 signs from AR 96 east of town to where I was stopped. Beyond that point, I think I saw one or two.

So my court date came and I was going to see if I could take a driver safety test in lieu of paying the fine (I've not had a ticket in at least 5 years). "City Hall" was a nondescript white block building with a small sign out front and a flag pole. The courtroom was locked so I went into the City Clerk's office to find out when court started. The clerk told me the wrong court date was put on my traffic citation. So when IS my court date? She didn't know...but she was more than happy to have me pay my fine. I suppose I should have put up more of a fuss or called a lawyer at that point, but I just wanted to get it over with, so I paid my fine and left.

I'm not a lawyer (and I don't play one on TV, though I have stayed at a Holiday Inn Express), but this whole thing sounds kind of odd to me: the ticket appears to be pre-filled out, there are few Speed Limit signs and court appears to never be in session. But what do I know? I'm just a guy who likes to photograph old bridges and odd road signs.

Has it really been since April since I last posted? I really need to take more time to keep this blog updated. I just got back from a week in and around Kansas City and am working on getting photos edited & posted to Flickr.

Here's a sneak preview: I found this near Excelsior Springs: it's along Williams Creek at Tryst Falls Park. It was built around 1920 and was originally part of MO 92. There is also a nice waterfall below it. 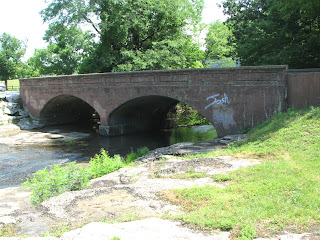