History of Highway Signs (Part I)

As you may heave heard, U.S. Highway System recently celebrated its 85th birthday.  It was November 11, 1926 that the United States Numbered Highways system was officially designated.
Previous to that most roads were a series of designated trails, such as the Lincoln Highway or the Dixie Highway. What's now US 71 was, in part, part of the Jefferson Highway

In 1948, the design was modified slightly to use more rounded letters and numbers

Then in 1948, another style was added to keep up with the demands of high speed traffic

Then in 1961, the design was changed once more to the now familiar black and white

But there would be one more change: in 1971 the shield shape was changed slightly

And if that's not confusing enough, Texas had their own design

So did Missouri (most often used on expressways)

Yes, I know: 71 doesn't go to Florida. But can you imagine trying to keep up with all these colors?

Oh, and one more:

City Route US Highway sign. Missouri used these as did several other states, but Arkansas did not.

No, that's not all. There are several other variants, but most are a combination of the above. Maybe I'll tell you about them, someday. ;)

Thesaurus.com defines cagey as an adjective meaning tricky. Yup, that just about sums up it up. I have found what I consider cagey behavior at K&G aka Kum & Go.

I drink a lot of tea when I'm on the road. Usually, I have a refill cup with me so I save e few pennies on my drink. Kum & Go advertises 32 oz beverages for $1.19 plus tax, but in really fine print, they say refills are 89 cents. Yet, nearly every Kum & Go I stop at charges me full price for my refill. Do they not hear me when I tell them it's a refill. I had one manager try to tell me they don't have a refill price (so why is it posted?).

This is, IMO, quite dishonest. They advertise a special price for refills, then refuse to honor that price. I suppose shame on me for still going in and still expecting them to honor the refill price. Yet, not every c-store has fountain tea: that's why I stop in. I like to stop at Quik Trip, too, but I don't see them very often anymore since they left the Springfield, MO area.

I suppose I'll just have to find someone else who has tea and will give me a price break for having my own cup (even if it IS from K&G).
Posted by US 71 at 1:57 PM No comments: Links to this post

Thanksgiving Day, time for turkey...and turkeys on the road.

I drove to a friend's house for Thanksgiving dinner and encountered all kinds of "turkeys" on the road.
Of course, there was the usual assortment of speed demons who, no matter how fast you were driving,  were driving faster than you were (and you're in their way).
I also got to part of a "sandwich": the guy ahead of me was driving too slow, the guy behind me was driving too fast and there was no way for me to change lanes due to the semi-truck in the other lane.
And what is it with semis that drive slow, then when you pass them suddenly speed up and pass you? Is this some sort of game?
All the c-stores were more crowded than the roads when I stop for a caffeine boost. I've rarely seen so many people standing in line for the restroom.
The trip home was less eventful, though one person ahead of me slowed way down for no apparent reason then sped back up again.
About 2 miles from home, I noticed traffic backed up for nearly half a mile on the Interstate: they were all trying to get to Target for their Black Friday sales that started at Midnight. I'm glad I didn't have to go there. I simply slowed down, switched lanes and kept going. What is it about Black Friday that makes people act like idiots? 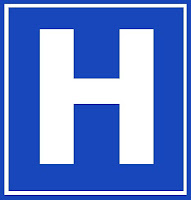 H is for Hell. H is also for Hospital.


Yes, I've been through Hell and I've been in the hospital. Long story short, I went to an SCA gathering in Springfield, MO and came down with pneumonia. I wound up spending 9 days in St John's Mercy Hospital. NOT my idea of a good time.


I got sick on Friday, went to the hospital on Saturday and finally got out the following Sunday. Of course, I was ready to go by Wednesday, but the doctor kept insisting on "one more test". When I finally got the OK to leave, the nurses wouldn't let me because nobody told them I was OK to leave.


So I've been home about 10 days now after spending a few days at my mom's apartment getting my strength back. I'm better now, though I seem to be tiring easily. Guess I just need to rest a bit.
Posted by US 71 at 10:47 PM No comments: Links to this post