I've noticed the employees Assocoiates at my local Wal-Mart never say "HI" or Thank you". I've actually noticed this at a few other locations as well. So I sent them a message asking why.
Their response: - We’re always looking for ways to make your shopping experience at Walmart even better.
WTF? You don't say "Hello" or "Thank you" because you're trying to make my shopping experience better?  I don't get it?

Well, the end for 2011, at least. I didn't make the 6000  photo mark I was aiming for on Flickr. Looks like around 5005. I'm not even sure where I started last January.
So let's say I'm at 5000 photos right now (though I still have a few to add). By this time next year, maybe I can be at 7500 photos.  That's a LOT of photos!
It will help if I don't get sick and find more opportunities to go exploring, especially in areas I haven't explored much.
I'm hoping to go out tomorrow for a few hours and check things out in my area, probably along the Pig Trail.
Sometime this next year, I want to explore the US 67 expressway north of Little Rock as well as parts of old US 63 between Jonesboro and West Memphis. I'm hoping AR 530 will be open at Pine Bluff so I can explore it as well. I just need to make some time and save up some gas money.
But I'm pretty much tapped out for now. I think I'll call it a night.

AHTD (Arkansas Highway and Transportation Dept) recently replaced exit signs along I-540 between Fayetteville and Bentonville. Some of there were looking fairly old, having been erected when 540 was first opened in 1999.  It actually took them close to a year to complete this project having started in September 2010. The new signs are a little large than their predecessors and indicate a few routing changes.
AR 12, for example,  used to follow US 71B all the way from Raibow Curve in Bentonville to 8th Street in Bentonville. Now, it follows 71B to I-540 then follows 540 to US 62 East. 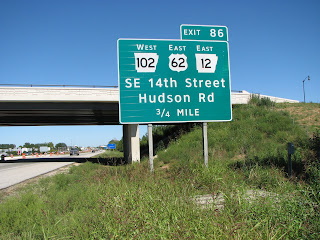 Why the change, I don't know...maybe to keep large trucks away from Downtown Rogers?

Well, while they were putting up the new signs, they missed one at the end of the NB 540 off-ramp: 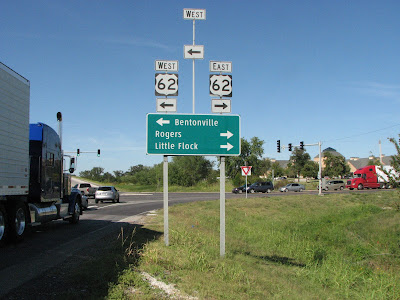 That should be AR 102 where the blank space is. It's been that way for over a year and AHTD has never fixed the problem. Even when the put up the new signs, they missed this (the green directional sign is brand new). 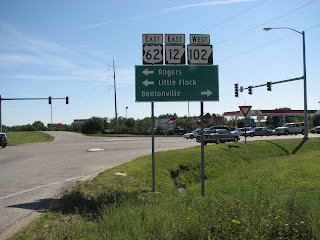 This is coming off southbound 540 at US 62: looks like they forgot the arrows here... how did you guys do that??

And to add insult to injury: 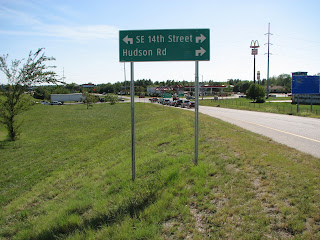 Hudson Road is in Rogers, which is to the left, not the right. Technically, SE 14th does go both ways, since Rogers is actually a half mile east of here. FWIW, the exact same sign is posted at the other ramp: arrows and all. So someone must have forgotten to flip the stencil when making the second sign.

Sadly, this isn't the first time they got it wrong: it was November of last year they posted the Johnson Exit as Great House Spring Road.

So what's going on, AHTD? Why all the errors?

UPDATE: I have a report that the Hudson Rd signage has been corrected. I hope to verify this sometime this next week.
Posted by US 71 at 5:43 PM No comments: Links to this post