It's somewhat sad and a bit ironic that a Road Scholar would know more about highways than the state department of transportation.
It's been over a year now since LADOTD (Louisiana Department of Transportation & Development) closed the Melville Ferry along LA 10 at Melville. The reason given was that it cost too much and carried too little traffic.
Now, after looking at lots of old maps, I figured out this section of LA 10 was originally part of US 71 until circa 1935. When I contacted LADOTD about the closing of the Melville Ferry, I asked them how it was, citing that LA 10 was an old alignment of US 71 as well as possibly the Jefferson Trail before that.
Well, they knew nothing about it: nothing about how old the ferry was, nor any knowledge of LA 10 being part of original US 71 / Jefferson Trail.
I guess if I really want to know more, I'll have to go down there in person and do some research on my own.

So nice of you to totally ignore me again.  I know you weren't that busy because my server (and 2 others) were standing by the food window having "social hour". Oh, but they were SO busy using the colored pens to decorate the comment cards.  Of course, now that they have decorated the comment cards with polka dots, stars and smiley faces, it's almost impossible to leave any comments because the illustrations will cover things up, or at least make it so the comments can't be easily read.
BUT, I have a solution: a 2x4 mailing label printed with my comments. I actually got twelve sentences in 8 point type on the label, which I then stuck to the comment card. Nice of you to have pre-addressed the card, though it did cost me a stamp.

Of course, you won't know me since I didn't sign the card, but I don't care about that.  What I care about is that I'm tired of the crappy service, which you don't seem to care about. If you Do care, you'll read my note and do something about it. If you don't care, you'll ignore me and nothing will change...except I'll never eat at a Western Sizzlin again.
Posted by US 71 at 8:35 PM 1 comment:

I went to the Memphis Road Meet a couple weekends ago. A total of seven of us spent the day running around Memphis observing construction along I-69 and Future I-269.

We wrapped up around 6pm and I spend the next couple hours retracing parts of our tour to investigate a few bridges we passed along the way. One of the was the Fox River bridge along TN 205, a steel stringer built around 1949. 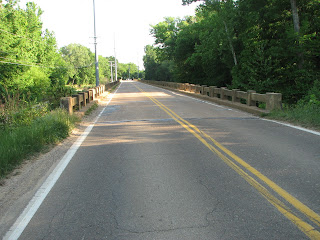 On the trip home, I hit the "mother load" of bridges: I found at least 20 of the 1930's era bridges along US 70 from just east of Brinkley to just before DeValls Bluff, including this gem over the Cache River. Bridgehunter officially lists this as a "steel stringer", but I call this a "radiator" bridge since the design reminds me an old fashioned radiator. 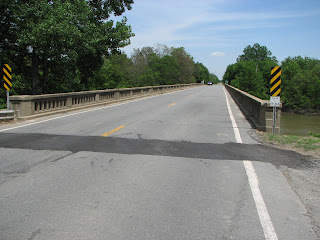 I'm slowly getting things posted on Flickr as well as posting a few of my bridge finds on Bridgehunter. I've been gone quite a bit lately, so I have close to 2000 photos to sort, edit and pick the best ones to post.

Oh, and I also found this abandoned railroad bridge at DeValls Bulff: 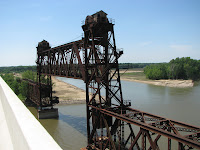 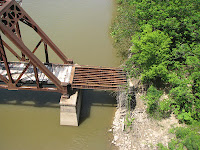 This was a tough shot: I had to lean over the side of the highway bridge and pray I didn't fall in the river.

I found a few this past weekend near Pine Bluff, but those are still in my camera, so I'll have to talk about those another time.