Well, it wasn't John Lennon, but Instant Karma got me anyway.

I was in Joplin a couple months ago for the Route 66 International Festival. Lots to see, lots to do: car shows, vendors, tours, music, and (of course) food.

Lunch on Friday found me down on Main St in Joplin (original alignment of US 66 through town). Lots of food vendors as well as several eateries.  I happened across this one called Instant Karma, a hot dog and chili place. I love good chili (like Steak n Shake's Chili Mac), so I thought I would give them a try.

Service was rather mediocre: my server was always in the corner having "social hour" and I was flagging down other servers to refill my tea, but was right on top of things when it came time to pay, though.

Anyway, I ordered the Spaghetti Red: chili, cheese, and onions on a bed of spaghetti. It sounded good, so I gave it a try. 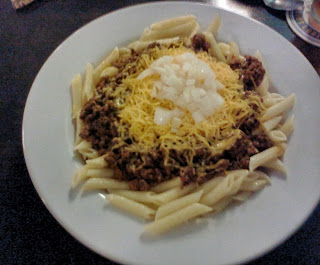 Well, Penne pasta is not exactly spaghetti, but close enough. Lots of meat (more than SnS gives you), a generous portion of cheese, and onions (I should have asked for "easy on the onions", I guess). All in all, it didn't seem too bad: spicy, but not overly so, a little bit of grease, but it didn't seem too bad. I was beginning to think I was in heaven...until I got to the bottom of the bowl and saw pasta swimming in a pool of grease.  *UGH*

Against my better judgement, I tried fishing the pasta out the grease, until I just couldn't handle any more grease. So I paid my bill and got out of there.

Less than an hour later, I was having stomach cramps and looking for the nearest restroom.  Unfortunately, that wasn't the end of it and I got sick twice after that.

Luckily, I had a bottle of Pepto-Bismol back at the hotel, so I headed back there, too a dose, then took another does after getting sick again.

So I missed the auto show, and missed meeting many of the 66'ers I regularly talk to on-line.

Saturday was much better, but that's a tale for another time. :)

So Tired, Tired of Waiting

When the upgrade of US 71 to I-49 was first announced in Missouri, plans were made to finish the incomplete roadway from Pineville to the Arkansas State Line, eventually meeting up with Arkansas' section. Unfortunately, AHTD didn't have the money to finish their section, so MODOT reapportioned their money to upgrading and improving existing US 71 south of Kansas City.

So Arkansas is waiting on Missouri, who was waiting on Arkansas, who is now waiting for Missouri.

I reaaly need to quit doing this, but I got a good deal on it. I've been playing e-bay again and found a sign I didn't think I could live without: 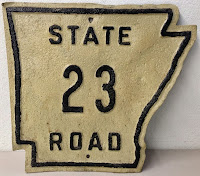 I won't say what I paid, except I good deal on it and paid a lot less that they were originally asking for it.

It will join the wall of honor with my State 68 Road shield and Missouri 11 shield.

Of course, now I need to clear out a couple signs to make room: 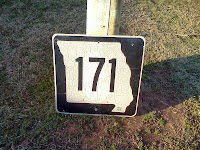 I also have this 24x24 US 66. Never posted to my knowledge, but has a few minor scuffs from the previous owner. 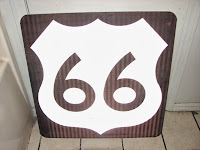 I also have lots of maps to get rid of. Now if I could find the time to get them all sorted. :(

I drove by my local Popeye's Chicken today and saw a sign for Chicken Waffle Tenders. Well, I got curious, so I went in to try them.

For some reason, I was expecting waffle-shaped chicken tenders, but they were the usual size tenders covered in a dark brown breading. The flavor was wretched, like cheap maple syrup mixed in the breading. They came with a Honey Maple dipping sauce that tasted like cheap, imitation maple syrup. I was, to say the least, rather underwhelmed. I tried the dipping sauce on my fries and decide to eat them plain. I should have paid an extra 25 cents for some cajun-style mustard.

Finally, I got the rest of my order. I finished it quickly and left before they could again try to bully me into ordering dessert.

I've never had that happen before: trying to bully me into ordering more. They must be trying to reach a certain sales quota.

I've been monitoring the progress of the I-540 reconstruction around Fort Smith and have been impressed by how fast the crews are working to rebuild the roadway. Southbound bridges over Grand Ave and Rogers Ave (AR 22) are progressing quickly.

One thing about the construction has struck me as odd, however: the roadway is being rebuilt with asphalt, not concrete.

When I-540 was built back in the early-mid 1960's, the roadway was concrete. 50 years later, it's showing a lot of wear so it makes sense to rebuild the roadway...but with asphalt? Asphalt has an 8-10 year life span while concrete has a 30+ year lifespan. So why is the road being rebuilt with asphalt? Why is AHTD so short-sighted and cheap as to specify asphalt instead of concrete? It may seem cheaper in the short-run, but in the long run asphalt costs more because you have to keep replacing it or paving over it. But I guess no one considers this.

That's typical Arkansas, I fear: plan for now, not the future. Ten years from now, they'll say "oops" and try to catch up, but never will.


It's been too long and I've been way too busy to post.

Catching up:
I-540 work continues in Ft Smith. One bridge over Grand Ave is down and being replaced as well as at AR 22./Rogers Ave. Several other bridges are down, including one over AR 162 and one over 540 at US 64 in Van Buren. It's a big mess, but I'm impressed by how fast the work is progressing.
One complaint, though: the resurfacing is being done in asphalt, not concrete. Asphalt is cheaper, but concrete lasts longer. Five years from now AHTD will beg for more money to resurface 540 again.

Lots of work on I-40, as well: almost the entire highway is being resurfaced, including around Russellville which was ignored 13 years ago when the last highway bond issue was passed.

At Texarkana, AR 549 has finally opened from AR 245 to US 71 north of town. I attended the ribbon cutting back on April 30. It was going to be another week before the road actually opened, but then, inclement weather pushed it back another week. I took a few photos and posted them on Flickr.


I've not seen much progress on other sections of I-49: a bit of work around Fort Smith, but that's about all.

Oh, and I found this cool antique shop near Sarcoxie, Missouri.  They have lots of old signs out front. I grabbed a couple Missouri highway markers: 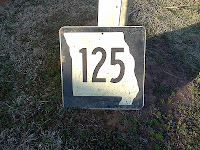 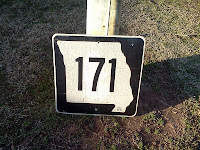 These both say MHTD (instead of MODOT)  so they date back to between 1980 and 1996, probably closer to 1980's since they are 3 digit squares. The 125 is likely older since it's a steel sign, as opposed to 171 which is aluminum. I'm still trying to decide what I want to do with them. 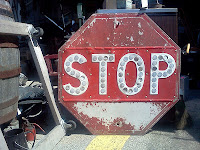 This is a 36 inch STOP sign with reflector buttons...a rare find. These were common along Missouri expressways in the 1960's. I've wanted one for a long time, but I probably paid more than I should have for it. I actually bought it for someone else, but then they weaseled out of the deal after I bought it, so I may post it to e-bay... I'll see how my fiances are the next few weeks.

Yes, I'm going to get in big trouble if I keep stopping there. I mainly just went to look around and never really expected to find anything (yeah right).

So am I all caught up now? Probably not. But it's good for now.

Fayetteville, Arkansas recently announced plans to construct a flyover ramp from northbound College Ave (US 71B) to the Fulbright Expressway. This ramp will allow traffic to access I-540 without have to go through the Joyce Blvd "jughandle".

When the Fulbright Expressway was first built in the early 1970's, it was a 2-Lane bypass of US 71 around Fayetteville. It began on the south end of Fayetteville, about a mile north of the Fayetteville Airport (Drake Field), looped around the west side of town, re-intersecting US 71 apporximately 3/4 mile south of what is now the Northwest Arkansas Mall.  To go from northboud College Ave to southbound US 71, drivers used a "jughandle" turnoff at what is now Joyce Blvd. Drivers would turn right into the jughandle. left on Joyce Blvd, then south on College Ave. Why the flyover wasn't built originally, is anyone's guess.

In the intervening years, the area around College Ave and Joyce Blvd has overgrown commercially and become one the busiest intersections in the state. Using the "jughandle" to access Fulbright Expressway (now a 4-Lane divided road) is no longer viable given the amount of traffic in the area. 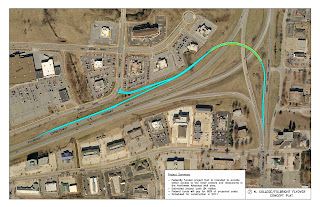 So 40 years after it should have been built, the City of Fayetteville (NOT AHTD) is finally building a flyover, which should take some of the stress off the College & Joyce intersection and allow access to Mall Ave...at least until the area overgrows again.
Posted by US 71 at 11:25 AM No comments: Links to this post

AHTD recently announced plans to improve Interstate 540 between I-40 at Van Buren and Hwy 22 in Fort Smith. Plans call for widening the shoulders, reconstructing the pavement, reconstruction or renovation of nine bridges (including replacement of the Arkansas River Bridge) and replacing/upgrading existing exit signage (which, if you've driven I-540, you'll know how old and worn some of it looks).

Another part of thir project will be renumbering the exits along I-540. Currently, they run from Exit 1 at Interstate 40 to Exit 14 at US 271/AR 253.  The proposal is to reverse the numbering to match the exit numbers on the Alma-Bentonville segment.  The "purist" in me disagrees with this.  Since I-540 begins at I-40, the exit numbers should begin at I-40. In a few years, the north leg of I-540 will be Interstate 49: will AHTD then renumber the exits on the south leg again?  What happens when 540 is extended to I-49 south of Fort Smith {proposed only: I've seen no timetable for this, only maps showing a proposed alignment beginning near Hwy 45 (Phoenix Ave/Old Greenwood Rd Interchange)}

This seems silly to me. Granted most of the exit signs need to be replaced, but why renumber the exits?

Anyway, I have thrown together a quick guide with the old and new Exit numbers (or my best guess)

I'm Not Dead Yet

I've been down most of December with a bad cold. I brought one back from Kansas City, got over it, then picked up another one in Springfield over Christmas. So, I've not been on-line much and haven't had much opportunity for photos beyond a few random photos of I-49.  Hopefully, I can rectify this in the next few weeks, weather permitting.

So, yes, I'm way behind on the blog. I'm also behind on my new project (more on that another time).

By the way: I see someone has started using the term "Road Scholar" commercially. I've been using it since at least 2006 on misc.transport.road.

In the meantime, I leave you with a photo of my latest acquisition: 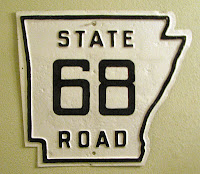