About twice a week, I've been driving I-540 between Van Buren and Fort Smith to monitor progress on the rsconstruction. Things are finally starting to fall into place. Most of the work on the road itself is finished leaving cable barriers and Jersey barriers to set-up, plus finishing the signs.

Yesterday I noticed a change in the I-540 shields: they are all "neutered"...no state name. I noticed a few weeks ago that were 2 styles of signs: some named, some neutered. The neutered signs had a taller, thinner font than the named signs. I talked about that here. At the time, AHTD said the signs would need to be changed, and true to their word, they did. 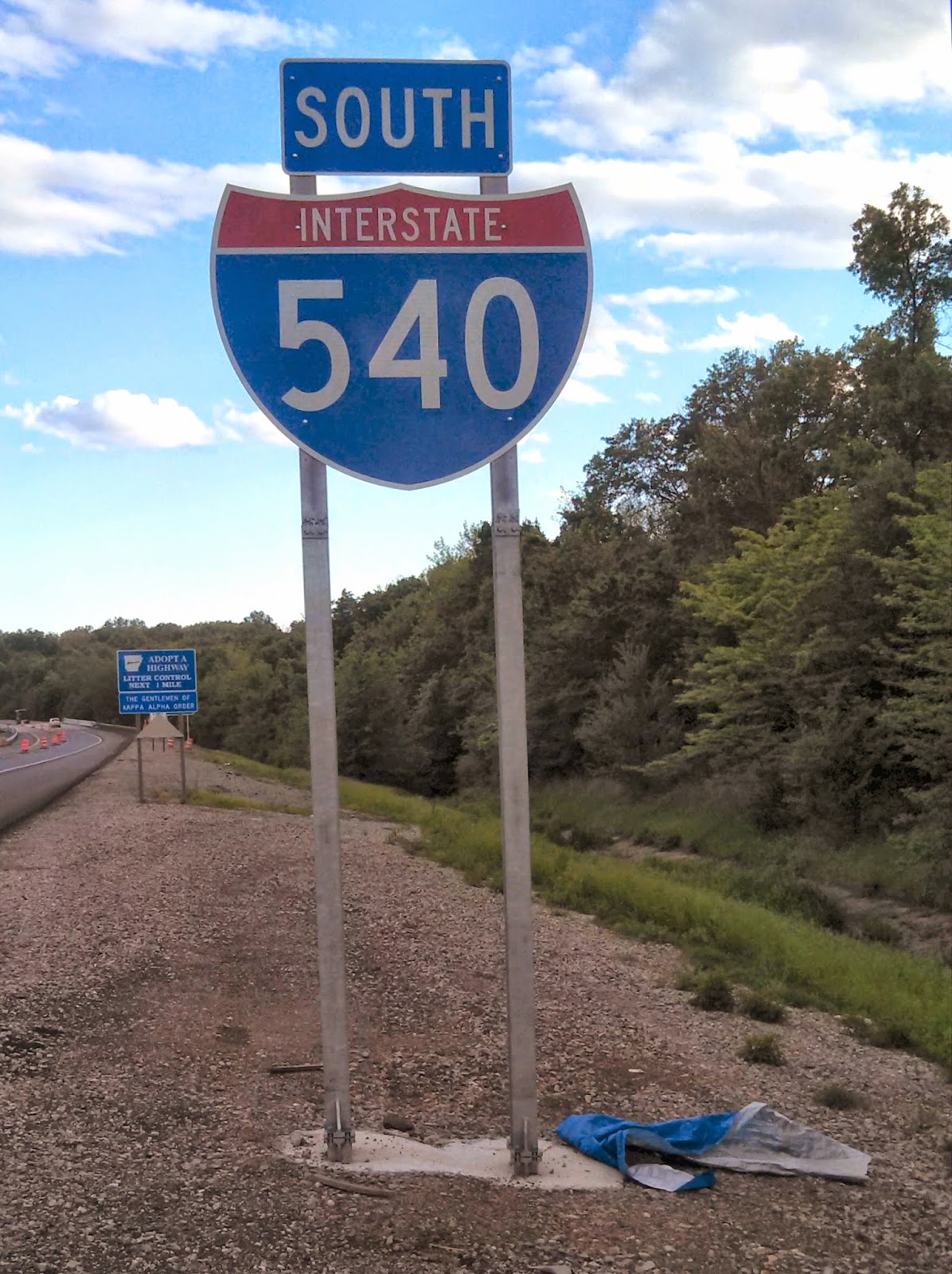 Now, AHTD is always complaining about never having enough money to keep the roads repaired, then they go out and spend money they (supposedly) don't have to replace perfectly good signs. If each sign costs $100 (not counting the labor to install them), AHTD has easily wasted $1500-$2000.
Then again, considering they took economic relief money to repave perfectly good roads and build state roads to nowhere, then needed a bond issue to fix the bad roads, I guess it's no big surprise.

Last November, I spent a week down near Lufkin, Texas doing the "Renaissance" thing. The night before we were supposed to pack up and head home, there was a weather bulletin about possible snow and ice in West Central and SW Arkansas.  I don't like driving in snow and ice, but was ready to do it if I had to.
I made it as far as Texarkana before I decided I needed to stop for the night (too many "scenic detours", so I was way behind schedule). Just as well, though: the storm front moved through and left a thin layer of ice on the bridges and trees.
Next morning, I got back on the road and pointed myself towards home, but no scenic detours this time: I needed to get home.in case the weather turned bad again. I made a pit-stop in Waldron, grabbed a Throwback Mountain Dew (good stuff), then was on my way again. When I got home, I couldn't find my phone.I checked the floorboards of the van: not there. Checked my pockets: not there.
Turns out my phone was either dropped or "requisitioned" while I was in Waldron. A quick call e-mail to ATT and I was told my phone would be "blacklisted" so no one could use it. Two days later, I was receiving messages from ATT that I was over my data limit and over my phone minutes.  How could this be if my phone was "blacklisted" ? According to the Customer Service representative, it wasn't. I'm glad I kept a transcript of my original conversation, so I was able to get the overages credited back to my account AND my missing phone finally deactivated.
Going to the local ATT Store, I got the run around when I tried to replace my phone. First they tell me I can upgrade for a minimal fee, then they tell me I have to sign a new contract to get a new phone, but they "lease" them now for X dollars a month. After 12 months, you can buy the used phone or upgrade to a new phone with a new lease. OK, fork that. I went to a place called Gadget Grave and replaced my phone for around $75. It may as well been an upgrade as it had more power and more memory than my old phone (ATT sold me a dog of a phone. Little wonder it was discontinued shortly after I bought it two years ago).  So I've been very happy with my new phone and have been doing a lot more with it(this coming (from someone who never saw the need for a smart phone)
Well, a week ago, I dropped my phone. I've dropped it a couple times, but nothing ever phased it. This time, the screen cracked. *sigh* So I thought about Gadget Grave and figured they could help me. Yes, they can replace the cracked screen: for $150 ! ! $150 for a phone I only paid $75 for? FORK THAT!
So now I am searching for another replacement phone. Most likely the same model as the one that just broke, but this time, I'm spending a few extra dollars for an Otter Box or similar case to keep it from breaking if I drop it. I was already in the process of doing that, but the phone had other ideas. :(


(No, I DON'T know why Blogger added that funky background color)

I seem to have become an unofficial sign inspector for AHTD. As part of the I-540 rebuild project between Van Buren and Fort Smith, all the exit signs are being replaced. That's not a bad idea, considering most of them are probably close to 30 years old.  Of course, there was that confusion over the exit numbers which may be why I've become their "inspector"

The first signs I noticed were the different style I-540 shields, which I discussed a while back. Then I started noticing the exit numbers were wrong. First it was subtle like transposing Exit A with Exit B.  No big deal, but I asked AHTD and they responded OOPS! and fixed the problem right away.

Then I started noticing other signs, like this one for the Huckabee Nature Center, which said Exit 4 instead of Exit 11. No worries! AHTD fixed it within 24 hours of my contacting them. 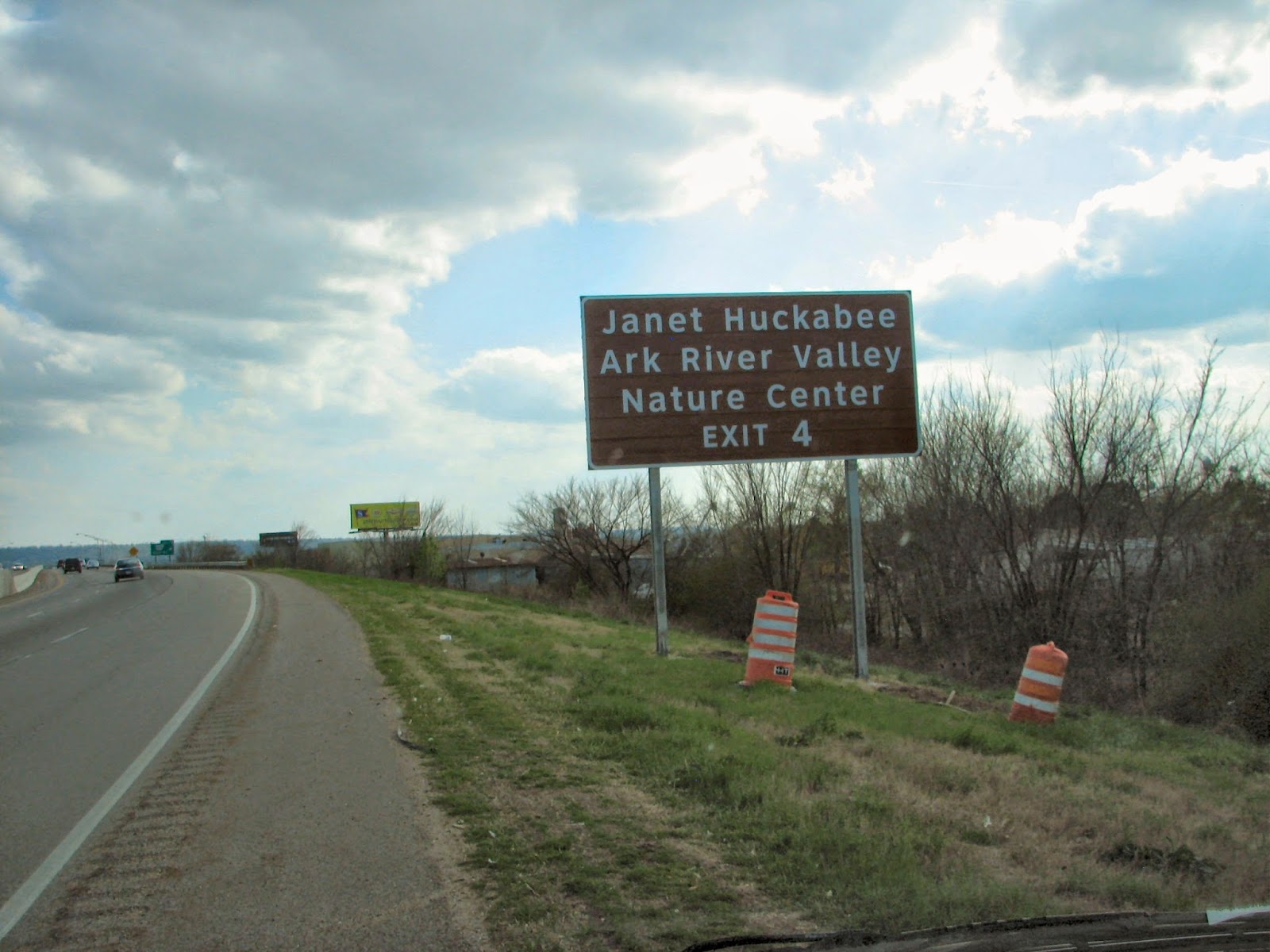 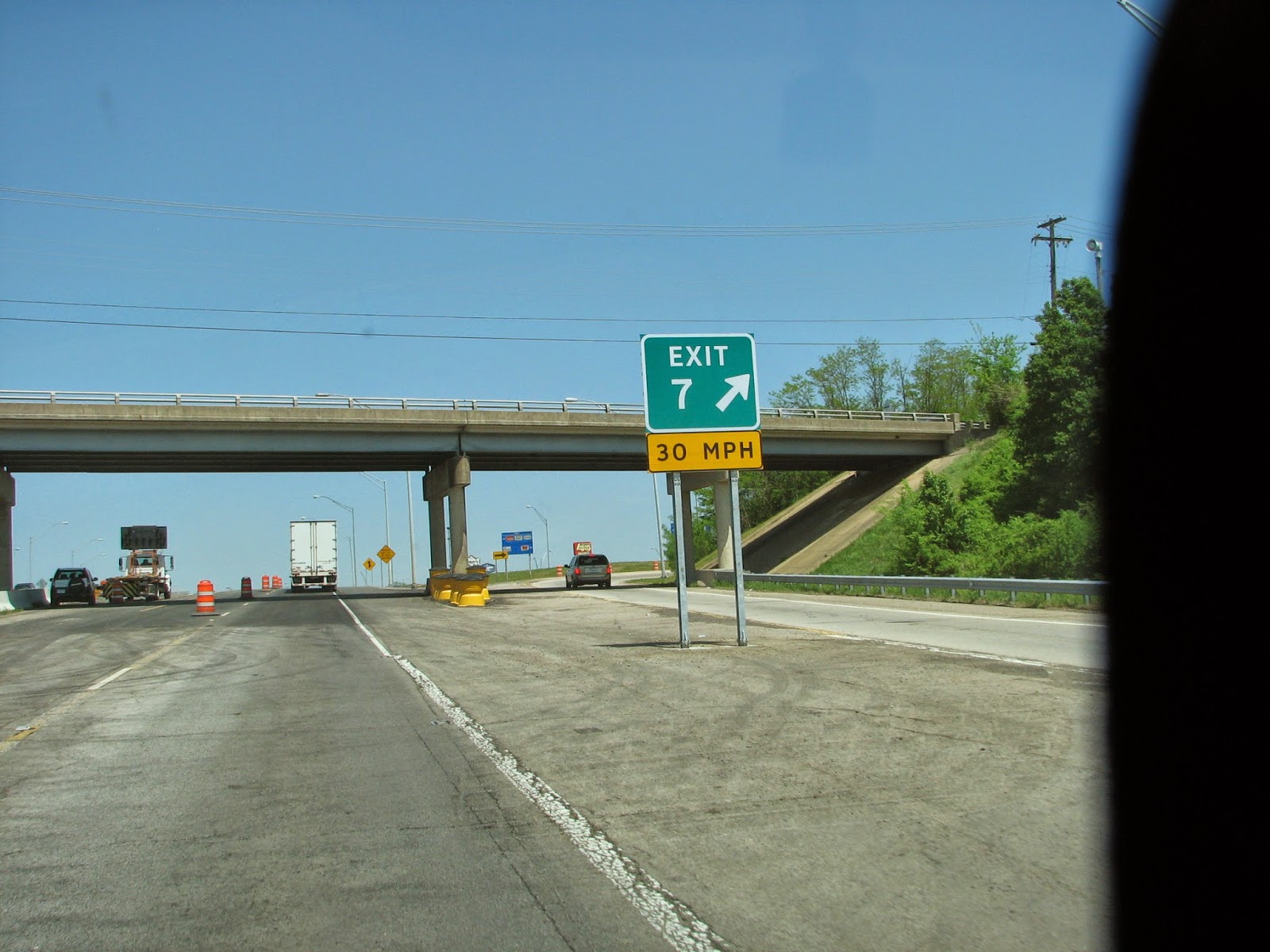 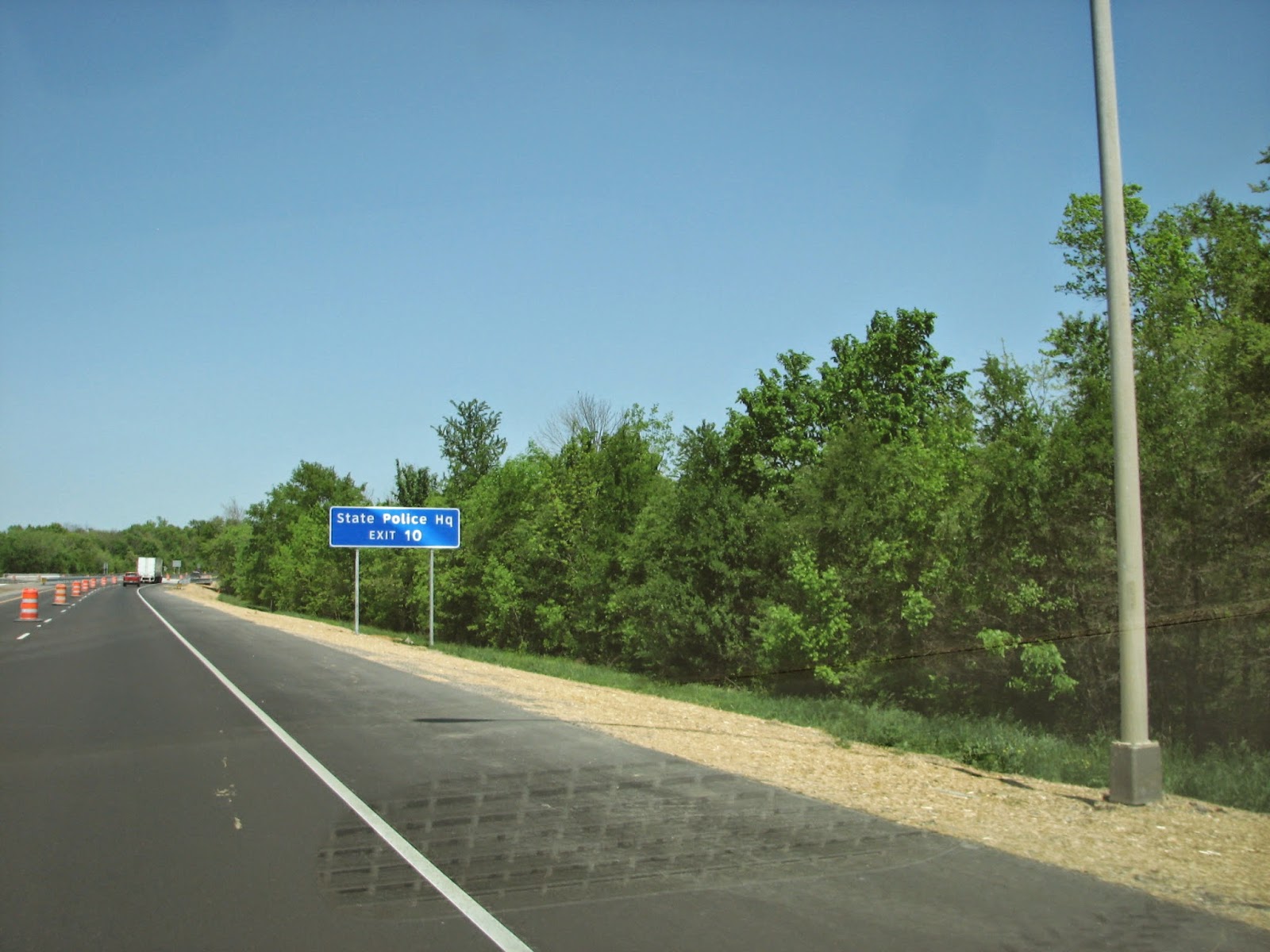 What happened? My guess is the sign contractor didn't get the message that the exit numbers weren't going to change so he got all the numbers wrong. But again, AHTD got it fixed very quickly.

OK, AHTD: I haven't been charging you for this, but I really think some small token of appreciation is in order. Maybe you can save me an I-540 or US 71 sign from the I-49 changeover? Barring that, how about an AHTD hat? 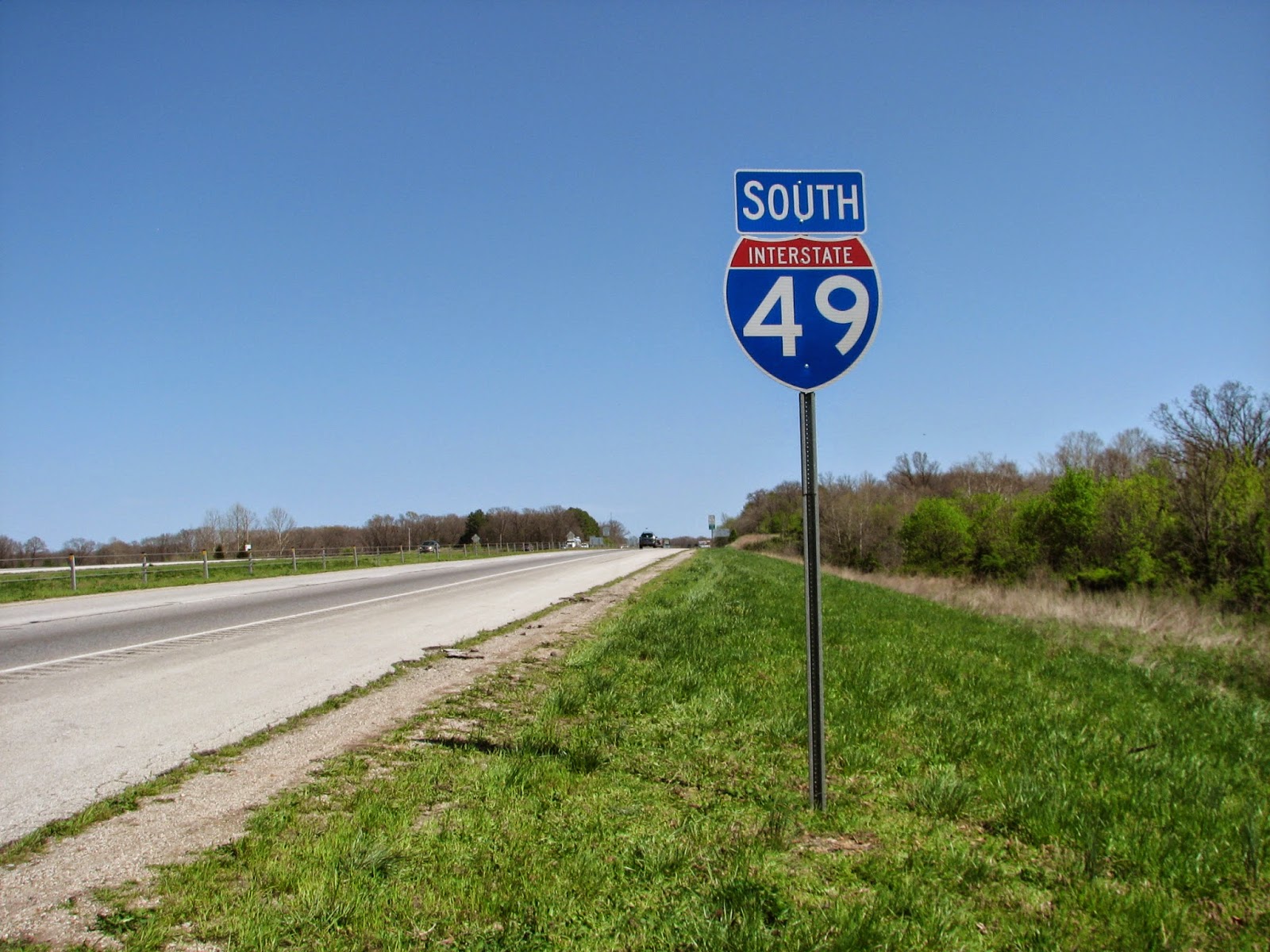 After a one-day delay due to rainy weather, the new I-49 signs began to appear yesterday. I caught up with the sign truck yesterday just south of Lowell. All the I-540 shields were being replaced southbound, beginning at 71B on the north end of Bentonville. A couple quick photos and I was on my way to Hiwasse (Gravette) and AR 549 (more on that later).

I came back through the Lowell area around 6pm and saw no I-49 shields south of Wagon Wheel Road, but out of the corner of my eye, spied one for northbound traffic. So I got off the freeway, headed back north and noticed the 540 shields were now I-49 going north as well.

So it appears that the changeover is being done in sections, rather than all the way down one side, then up the other. As of 7pm last evening, all the 540 shields north of Wagon Wheel Rd had been replaced, but only along the main road. None of the intersecting roads have had any signs changed out. But this job may take a month to complete, so those may be done later.If it was just the mainline, I'm sure they could finish in 3-4 days, but the side roads will be a pain in the @ss, I'm sure with 10 or more per junction.  I'll have to check back in a month and see how many they missed ;)

AHTD says the reconstruction on I-540 should wrap up in 4-6 weeks if the weather stays good. If it doesn't stay good? I'd give it 8-10 weeks.
As construction wraps up, I admit I am disappointed that the concrete pavement has been replaced with asphalt. That means in 5-6 years, AHTD will be resurfacing 540 again (unless they simply let it rot, like they have US 71 north of Alma).
The Arkansas River Bridge was supposed to be replaced since it's over 40 years old and obsolete, but AHTD decided to save the money. Let's hope it has another 40+ years of life in it, since I don't see them spending any money on it at any time in the future, given all their pet projects.

AHTD has changed their minds on the exit numbering and will keep the original numbering sequence. Exit 1 A-B will remains I-40, 2A-B stays US 64, etc. The original proposal was to have all the exits going in the same direction to match I-540 between Alma and Bentonville. But now that 540 is being changed to I-49 heading north from Alma, there's no real need to change the numbering. Now will you start putting the exit numbers on the signs?

Now they should concentrate on 540 between Rogers Ave and the Oklahoma State Line....not they will. Maybe when the build the future connector to I-49?. 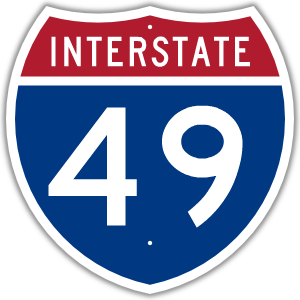 AHTD announced this week that the Federal Highway Administration has approved I-49 in Arkansas. Beginning April 21st,  Interstate 540 between Interstate 40 at Alma and US 62 at Bentonville will become Interstate 49.  US 71 between US 62 and Business 71 north of Bentonville will also become part of I-49.

What this means in the immediate future is AHTD will be replacing all the I-540 signs (approximately 700) north of I-40 with I-49 signs.

Other sections of future I-49 in Arkansas will receive the designation AR 549/Future I-49, including a section near Gravette,  as well the the section between AR 22 at Barling and US 71 south of Fort Smith.  The road south of Texarkana is already posted AR 549 and will likely be re-designated as I-49 once the road is finished to the Louisiana State Line and connectes with I-49 in Louisiana.

Why the rush? AHTD (and Arkansas as a whole) hardly does anything in a hurry. Best guess in the roads community is money. If Arkansas has these unconnected segments of I-49, perhaps they feel they can get government money faster by having one road with unconnected segments as opposed to several short highways with different designations.

In addition, exit signs along I-540 at Van Buren will have to be changed to eliminate the 40/540 duplex... NEW exit signs that were just erected in the past month. 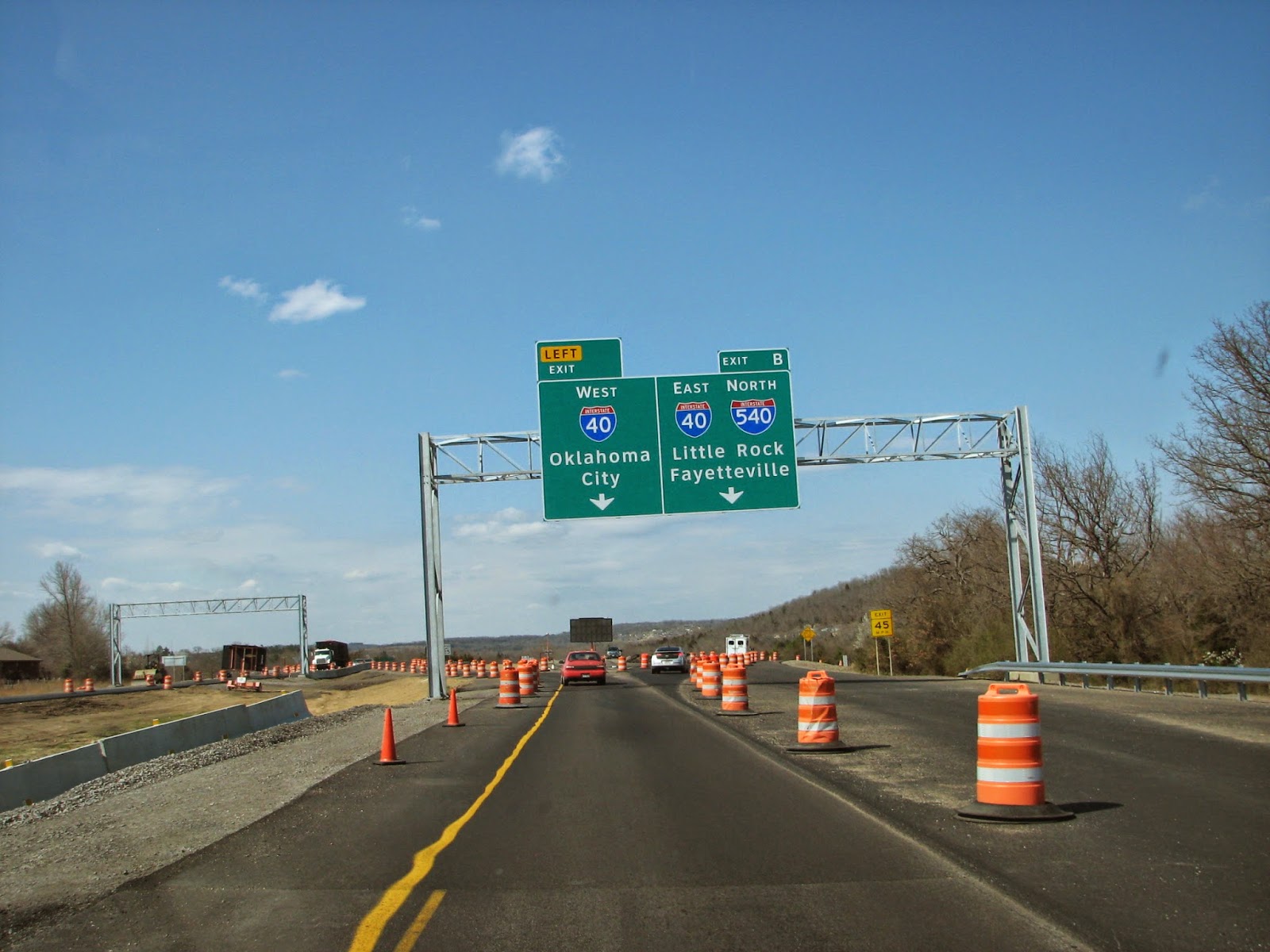 Did anybody think about I-49 before the 540 rebuild was started? AHTD says they have no money*, so where is the money coming from to replace all the signs? I guess the money they saved by not repairing the 540 Arkansas River Bridge will help offset replacing the new exit signs.

Oh, and don't expect to see any Arkansas I-49 signs: AHTD has already announced that the state name will not appear on the new signs.

Weather permitting, I hope to be out Monday looking for the first I-49 signs. Maybe I'll even catch up with the sign truck :)

(*they claim to have some money now that the bond issue money is trickling in, but still complain that they don't have enough)