Something I hope to accomplish eventually is retracing the old Jefferson Highway from New Orleans to Canada. It's had at least three different alignments over the years, including along parts of US 71. One section in Missouri roughly follows MO 59 south of Anderson (original US 71).
I've been somewhat remiss in my research as of late, but I'm hoping to do more in the Spring as time, weather, and finances permit.

I was doing some on-line mapping with Google earlier and  found yet another old section north of Noel. 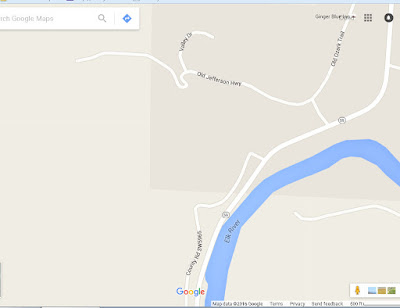 I'm going to have to get some old topographic maps for this: did JH connect to Road 5695 or does it disappear into the rugged terrain? Given the area, the road was likely realigned at some point but whether this happened after 1926 when Jefferson Highway became US 71, I'll have to go look. Given that maps from that era aren't as detailed as they are now, it could be tricky.

If nothing else, it's another excuse to go exploring. 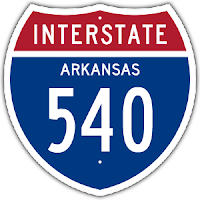 I feel you made an error when you rebuilt I-540 around Fort Smith last year: you should have built a complete lane Northbound from AR 255/Zero St to AR 45/Old Greenwood Rd.  It makes no sense to have an on-ramp that ends, then begins again  a few hundred feet later as an off-ramp.  You should have extended the on-ramp and turned into an Exit Only off-ramp.

The same thing applies to Southbound 540: the on-ramp from Old Greenwood Rd should have been extended as far as Zero St and made into an Exit Only ramp.

Yes, I know you built 540 in the mid-1960's to lower standards and never anticipated its current capacity, but if you're going to rebuild the road, why not make some improvements, too?

It looks as if Arkansas may soon have another Interstate Highway: as part of the highway spending bill paseed by Congress last  December,  I-555 has (finallly) officially been approved along US 63 from I-55 near Turrell to Jonesboro.

The biggest hold up was farm vehicle access, which is not allowed on Interstates, meaning an access road would have to be built across the St Francis Floodway. Apparently, that was a problem, in part becasue AHTD didn't have any funds set aside (typical).  However, US Representative Rick Crawford of Jonesboro managed to get an exemption for farm vehicles on 555 between Marked Tree and Payneway.

All that's left now is posting the signs and (of course) the ribbon cutting. I've seen no official timetable, but my guess is the designation will happen late this Spring or early Summer after AHTD gets all 200-something signs posted and all the officiousness can be arranged.

I'm hoping once Spring starts to move in, to make a run over there and check signing progress.  Besides, it's been ages since I've driven AR 463 (old US 63) and I am sure there are several bridges waiting for me :)

Unofficial word from AHTD is the Ribbon Cutting for 555 will likely be in March. The sign shop is working on getting signs ready.

Wal-Mart just built a new Neighborhood Market near me in Fort Smith (right before they announced they were closing other stores, but that's another story).  The two main entrances are off US 71 with a truck entrance waaay around the back on a side street and a side entrance.

However,  the two main entrances off 71, only let you exit to the south since it's a divided highway. To go back north towards town, you have to either use the truck entrance in back, the side entrance which dumps you on a side street with a long red light, or cut through the bank parking lot posted No Thru Traffic, which again dumps you to the side street and the long red light The side street also leads to a small residential area, some offices, and the Pic-n-Tote. So a good chance you'll be sitting waiting for traffic to clear for at least a couple signal changes.

Did nobody think of this or was the land so cheap no one cared? To be honest, the Supercenter (or Stupor Center as I call it) is just as close to me going the other way, plus Harp's and CV's nearby, so there is little need to go down there, except maybe for gas, but why drive an extra mile just to save a penny a gallon? Spend 5 cents to save 15-20 cents?

AHTD seems to enjoy wasting money. It was announced this past week that the Big Piney Rest Areas on I-40 west of Russellville are closing to make way for renovations, including more restrooms, wi-fi, and a tourist information center.The rest areas (and the scenic overlook) will be closed for over a year while the existing buildings are razed and replaced with new structures.

So while the highways are allowed to crumble (last year's "improvements" are already starting to fall apart), AHTD is spending money to the upgrade rest areas (there are several others planned for upgrades as, well). Then they will complain they have no money to fix the roads.

Can someone please explain this logic?
Posted by US 71 at 9:47 PM No comments: Links to this post

I go out of town for a couple days and come home to really crappy news: Two Mile Creek Bridge on old US 71 south of Mena was destroyed by an oversized truck on Januray 8th. 6 ton bridge and an idiot driving a 16 ton truck.WTF was the driver thinking?

I have no words for this kind of idiocy. It saddens me and it sickens me.