I've always been a little bit on the big side, but now I'm about 45 lbs over where I should be. When the weather is good, I go for a walk at the city park or the nature center. Yet, it feels like "work" and it's hard to maintain a decent pace.
Yet, I exert just as much, if not more, energy on my bridge excusions and I never considered them work, per se. I'm working (walk across old bridges, climbing down embankments, etc), but it doesn't feel like work. It feels like fun (unless I break my ankle like I did 5 years ago).
So I guess the secret to losing weight is to chase more bridges and climb down more embankments?

The last dirt highway in Arkansas has been ruined! AHTD has decided to pave AR 220 between Lee Creek and Devils Den State Park. Devils Den has always been secluded and can be a little tricky to get to at times (winding, steep roadways with limited shoulders).

Well AHTD has decided 220 would make a nifty south entrance to the park, if it were only paved. So, construction has been underway for 6-8 months to widen the road to two lanes and pave it.
Sadly, the scenic beauty of this roadway is being ruined: trees bulldozed, hillsides carved up to level the terrain, even an old rock culvert that's being replaced by a new bridge.

I've been out there twice in the last few months and it, quite simply depresses me. 220 has never been a road for the timid: barely a lane and a half wide, it's lumpy and bouncy with "OMG I'm gonna die" curves, but one heck a view of the valley in places. It's a slow drive, but sometimes you could catch a deer crossing the road.

But all that will soon be gone in the name of "progress".

One small bright spot, however, is this cool knife I found in the middle of the road: 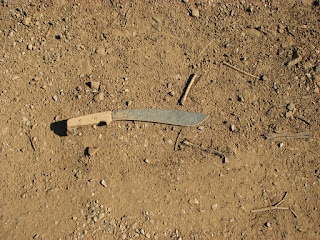 It's based on a Kukri , which is an Indian machete. Given how scratched up it looks, it had likely been sitting in the road for quite a while, lost by someone and buried under years of dirt and gravel, only to be uncovered during road construction.
I haven't decided what to do with it yet, but will probably have it sharpened and kept by my bed (provided I don't cut myself with it ;) )

Got to be a Record

Last weekend, I attended an SCA gathering in Tulsa. It's only about 2 1/2 hours for me if I take the turnpike, but what's the fun in that? I did take I-40 to Warner, then headed north on US 64. I never noticed before how many abandoned concrete culverts there are paralleling the highway: there's abandoned railroad right-of-way from Tulsa to south of Warner. I need to photograph some of them eventually.I was ahead of schedule, so checked out part of old US 64 through Muskogee. In addition to an old Texas-Pacific Railroad bridge, I found a nice concrete bridge over Coody Creek, about a mile north. Not bad for hardly trying ;)


Sunday was a different story: I left Tulsa heading west on old Hwy 66 to look for more bridges. I found the first one rather quickly, then an arch railroad bridge next to it. I wandered into Sapulpa and found two refurbished service stations (a Gulf and a Barnsdall). Heading west out of town, I found 2 more bridges on another old alignment of 66.


From Sapulpa, I headed down old US 75 towards Okmulgee and found 6 (I think) more bridges. Eventually, I found myself back in Muskogee chasing down a bridge I had forgotten to look for when I passed through on Friday.


A 2 1/2 hour drive took me 8 hours.Total number of bridges: 14. I think that's a record for one weekend. I'm still sorting photos, so it will likely be a day or two before I have them posted.

Quik Trip is moving into the fast food business.Well, they have been for the last couple years. Many of their locations now feature "QT Kitchens" where you can order a limited number of breakfast biscuits, shakes, sandwiches, pizzas, and cappuccinos.

I stopped at one in Muskogee over the weekend and ordered a personal-size pizza with pepperoni which was ready in less than 10 minutes. The price? $4.99 plus tax.
Verdict: a lotta bread for a lotta bread. The pizza didn't have a lot of flavor. The sauce was bland as were the toppings. Except for the "mouth feel" of eating pizza, I felt like I was eating bread. It was also very greasy and salty, prompting me to stop a couple times for some more tea to get the taste out of my mouth.

Overall, I wasn't real impressed. $4.99 seemed like a lot of money for cheap tomato sauce on bread. For that kind of money, I get can get a large pepperoni from the local "Buy One, Get Two Free" place...and the quality is about the same.