Oops! I did it again.

Late in 2017, ARDOT rebuilt the I-49/ US 71B/AR 112 interchanges at Fayetteville.  Two separate exits that were too closely spaced were rebuilt as a multi-level, multi-ramp complex with multiple exit and enter ramps. What had been two exits was now one exit that split into two. 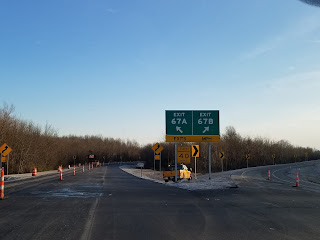 In January, I asked ARDOT if maybe the exit could use supplementary signage showing which ramp is 112 and which is 71B, so drivers wouldn't be confused?
Answer: The engineers don't think it's needed. (Well, of course, professional engineers know better than some amateur Road Enthusiast.)

Forward to April when I'm again in Fayetteville and driving by Exit 67 A/B.

ARDOT decided they DID need route signs at the exit (they have since been moved to the top of the exit sign). Nice to see someone listened (though they will probably never admit I had a good idea.) 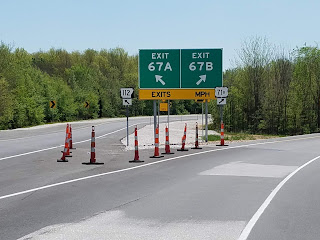 ARDOT is now adding pavement shields pointing to I-49,  AR 112 and US 71B, plus additional arrows. So tell me again how motorists won't be confused?
At the very least, I think they owe me a surplus AHTD hat, don't you think?