Finally got my Covid-19 shot today, after all that running around, being told to call for an appointment, then being told all the appointments were filled. They told me to come at 1:15 but I was there at 1 to be sure I had a space in line. Didn't matter: there were only 2 cars ahead of me. Even waiting 15 minutes after "just in case" something went wrong, there were still only a couple cars in line.
When I was finished, I drove up to AQ Chicken (not bad, but not as good as I remember), got gas, then headed home.
I'm not sure how long I should still self-quarantine : a week? 2 weeks? I'm itching to hit the road again. I've done a couple day trips in the area, but I have a lot left to explore. Hell, I'll probably live forever trying to get to everything.
Posted by US 71 at 8:20 PM No comments:

Fayetteville, Arkansas (home of the University of Arkansas) wants to memorialize one of the college's basketball coaches, Nolan Richardson. OK, whatever (I'm not a big sports fan). The street they have chosen runs in front of Bud Walton Arena, the U of A's basketball arena. BUT that street has already been named for Leroy Pond, a WWII veteran and alumnus of the U of A.
After some discussion, Leroy Pond's name will now grace Government Ave near the Fayetteville National Cemetery.  I just don't see why the city feels the need to change. Does this make me a bad person? Then again, Bill Clinton Blvd replaced California Blvd a few years ago. There's a Broyles Ave, but it's nowhere close to the U of A.
I suppose I'm too much of a purist.
Posted by US 71 at 4:48 PM No comments:

Nearly two years ago, I spent the night at a little "hole in the wall" motel near Hazen, Arkansas (Travel Inn?). It was not a very good place: the air conditioning barely worked and the place was overall rather run down. I left a review spelling out the problems and today received a response Thank you for enlightening the issues you faced while your stay with us the upgradation is been made. Hope we soon.   WTF was that?

I've always favored the "independent" (aka Mom & Pop) motels because they are often cheaper than the chains. But I'm running out of luck trying to find something that's not on its last legs &/or caters to the fly by night crowd.

I guess I'll have to bite the bullet and spend a little more. Either that, or find a KOA and sleep in the back of the van.

There I Go Again 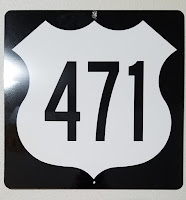 Piddling around on e-bay, I came across the guy who made my US 666 sign a few months ago. He only had a few last time I ordered, but he still had a few left. So, what the Hell: no one remembered me at Christmas or New Years, so I'm going to do something for myself.  After wracking my brain for a while, I came up with US 471,

I have one more signs on order, then that will likely be it until I can sell some of my SCA stuff.
Addendum: It appears I got the last sign. On e-bay he says "sold out".
Posted by US 71 at 9:38 PM No comments:

Occasionally, I get tired of my own cooking so I'll eat out. Usually a casual dining spot like the local hamburger place or Thai rice joint  I've also been known to haunt KFC once in a blue moon.

Today was different. Today I turned 61.  I normally don't make a big fuss over it, but I like to go someplace nice. This year, it was Doe's Eat Place. Yeah, they are a little pricey, but they are good for special occasions. I usually only eat there on my birthday. Sadly, I didn't this year.

I suppose it's my fault for not anticipating how busy they would be on a Saturday with limited seating. But asking me to come back in 3 hours when they close in 3 hours feels like an insult.

And So This Was Christmas

Christmas 2020 is almost over. Not much to say about it, though. I spent half the day working on cleaning my apartment and that was about it. This was my 6th Christmas without Mom and  the 10th without Dad. We rarely got along, yet sometimes I miss him.

My sister I rarely see or talk to. Just as well.

I've all but decided I'll probably never marry, so that leaves just me on the holidays.

Maybe if I' hadn't been so anti-Trump fours years ago, I'd still have friends. As it is, I rarely get to speak to anyone except my neighbors.  Perhaps that is my lot in life.

I've avoided the Covid (so far), but I'm tired of sitting at home. I want to hit the road and go exploring. Maybe 2021 will present better opportunities.

I've mostly been staying home due to the Covid-19 scare, but I ran up to Fayetteville to take care of some business. Now, I'll admit I knew 71B was removed from College Ave and AR 16 replaced 112 between 15th St and I-49 (and 112 removed from there to North St/Wedington Dr). I noticed those a few weeks ago,  but ARDOT has made other changes:

Spur 112S  has been replaced by Spur 16S along Wedington Dr between I-49 and Garland Ave. I guess I missed the memo on that. BUT while the exit signs along I-49 show the change, it is NOT posted along 112, though first confirmaton sign westbound on Wedington still says 112S. I guess the ARDOT sign crew forgot that one.
I wonder what other surprises they have planned?
Posted by US 71 at 7:18 PM No comments: